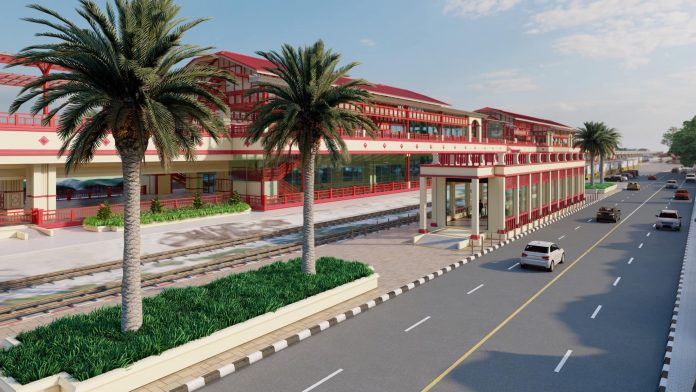 Images showing the exciting redevelopment of Hua Hin Railway Station have been shared on social media.

The redeveloped railway station will be used for the new dual track rail line which is currently being constructed in Hua Hin.

Hua Hin Today understands the old railway station, which is of course iconic not just in Hua Hin but throughout Thailand, will remain in place after the dual track line opens.

(Hua Hin Today has reported on the progress of the construction of the line here.)

The images of the new station show a 2-storey elevated structure consisting of a station office and waiting area on the ground floor.

The elevated platform of the new dual track line will co-exist alongside the original track, which is set to remain in place for freight trains or charter convoys used on special occasions.

Earlier this year, the State Railway of Thailand (SRT) said that the dual track railway which is being constructed in Hua Hin is approximately 85 percent complete.

Once completed, the dual track railway will transform travel from Bangkok to Phetchaburi, Hua Hin and eventually all the way to Thailand’s deep south and the border with Malaysia.

While not to be confused with the high speed train which had been mooted for Hua Hin (those plans remain firmly on the drawing board at present) are set to be significantly  faster than the current rolling stock.

The new dual track trains are expected to travel at approximately 160km/h meaning people can easily reach Bangkok between two and three hours, a big improvement on the journey by train currently – which  can often take between 6 and 9 hours!

The dual track trains will arrive and depart Bangkok at the new (and pretty spectacular) Bang Sue Grand Station.