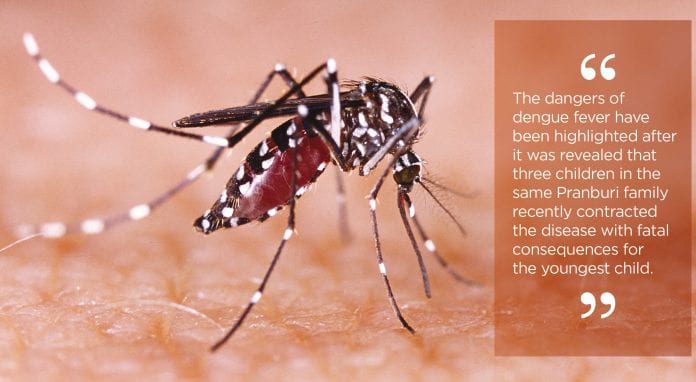 The death of the eleven year old girl followed complications caused by dengue fever leading to a fatal blood infection. The family’s three children, including an older 14 year old boy and 12 year old girl, were each diagnosed with dengue and received medical attention; however the youngest sibling succumbed to the disease.

The grieving Pranburi family wishes to alert all families of the seriousness of dengue with symptoms and complications progressing very quickly and of the need to seek expert medical attention without delay. The tragic story unfolded after all the children went to school as usual however the eldest daughter had complained of a minor fever.

The mother stated that she gave the child paracetamol after her child said she was OK and able to go to school. A few hours later the school informed the family of the need to pick up the child and take her to local medical facility.

After blood tests, the family says they were told that this was not chikungunya, a virus that is spread by the same kind of mosquitoes that spread the dengue and zika virus, however a dengue diagnosis was not confirmed.

While the mother and daughter were at the facility, the mother received a call from a teacher at the school to hurry to pick her son, who also has a high temperature. The mother rushed to take the boy to the same facility but the family says that a diagnosis was not given for the children’s condition.

Further tests were recommended after another three days and the family took their children home to manage the symptoms and administer paracetamol every four hours. The youngest daughter had no symptoms and went to school the next day as usual and could eat as normal after returning from school.

However, in the evening she developed a fever and the mother administered paracetamol. In the morning the fever had not subsided and the child was kept at home with a grandmother taking care of her as the mother needed to go to work. In the afternoon, the mother received a call from the grandmother as her daughter’s condition had become very serious.

The mother hurried home and took her daughter to Pranburi Hospital, but because of the girl’s deteriorating condition it was decided to move her to Hua Hin Hospital for more specialised treatment. Upon arriving at the Hospital, she was immediately taken to an emergency room where a medical team checked her into the intensive care unit.

The child was in shock with gastric bleeding requiring blood transfusions, but finally death followed an infection in the bloodstream. The family also moved their other two children for treatment to Hua Hin Hospital where they later recovered and returned to their home.

A team from the Public Health Office of Prachuap Khiri Khan and Pranburi District have since visited and inspected the family home and given advice about standing water sources with mosquito repellent sprayed around the home and surrounding areas. The mother said that before her children had contracted dengue fever, there were other children and adults in a nearby house suffering from a fever, but everyone had recovered and returned to normal health.

The distraught mother would like to warn every family to be very careful with dengue fever, which is very dangerous with a rapid onset and symptoms developing very quickly. Every house should remove standing water which allows mosquitoes to breed.

If children or members in the home become ill with fever symptoms, they need to act without delay and take them to a doctor and when they reach a hospital; the doctors need to quickly treat the patient.

The Mayor of Hua Hin has assigned to Mr. Jirawat Phramani, the clerk of the Hua Hin Municipality to urgently call a meeting of communicable disease prevention and health promotion officers to discuss ways to intensify their campaigns for dengue and mosquito-borne disease prevention due to the current prevalence of the disease.

A network of public health and community volunteers will provide additional information and education to encourage the participation of all households in preventative action. Reports of dengue fever patients in Prachuap Khiri Khan Province put the recent number of patients at 476, with two fatal cases including one male adult in Hua Hin.