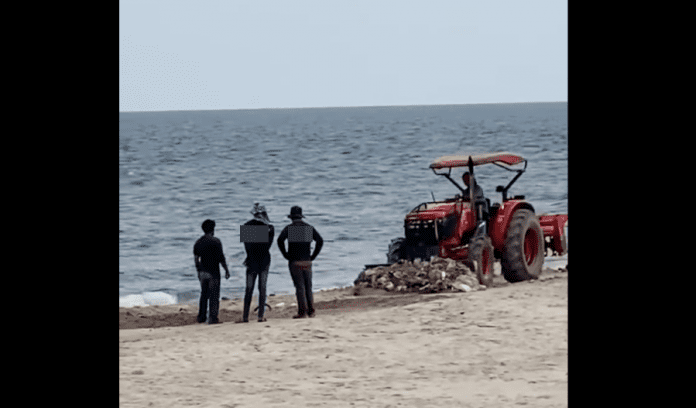 One of Thailand’s most senior police officers has ordered an investigation into an incident where a tractor was used to bury trash at a beach in Cha Am.

In his role as head of the Crime Suppression Division for Natural Resources and Environment, Deputy National Police Chief Pol. Gen. Roy Ingkapairote has ordered local officers along with Provincial Police Region 7 to launch an investigation after a video clip surfaced online which appeared to show workers using a tractor to bury trash on a stretch of beach next to a luxury hotel in Cha Am.

In the clip, the driver of the tractor can be seen filling a large hole with trash as three other people watch on.

The clip was taken by a guest who was staying at the hotel who later shared it on social media.

Once it was brought to the attention of the hotel management they were quick to take action.

Commenting on the incident from its official Twitter account, the hotel explained how beach cleaning had been outsourced to a private company.

The hotel confirmed that after being made aware of the incident the contract with the company was terminated.

However, Pol. Gen. Roy Ingkapairote said that was not the end of the matter.

He said that if the investigation finds that an offence was committed the perpetrators can expect to face prosecution in accordance with the law.

Pol. Gen. Roy said the incident is a serious one as the actions of those involved not only damage the environment but also harm the image of country, particularly at the time when Thailand is preparing to reopen to foreign tourists.