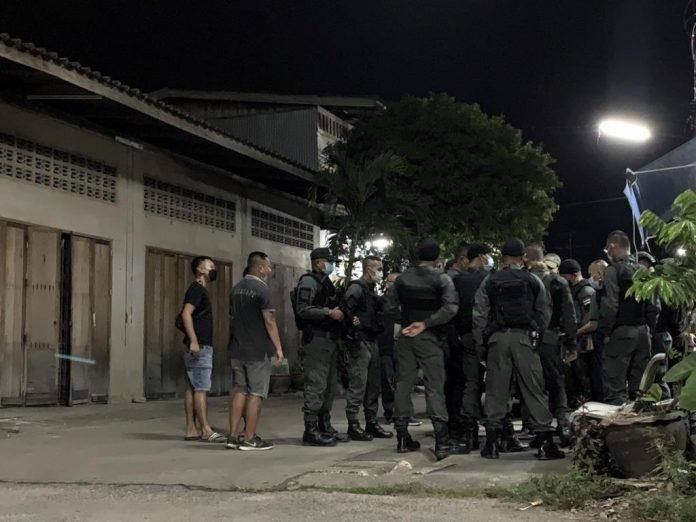 Pranburi police and officers from a specialist narcotics suppression unit were involved in an armed standoff with a suspect that several hours on Sunday night.

The ordeal started when police had been following a group of people suspected of being involved in drug trafficking.

On Sunday night (Aug 15)  police were stationed near to the Krung Thai Bank Pranburi branch after receiving a tip off that a drug deal was due to take place.

During surveillance of the location, police found a package on the side of a nearby road which was found to contain a large quantity of methamphetamine and kratom leaves.

While police were inspecting the package, a Mazda vehicle was seen acting suspiciously nearby. Inside the vehicle were two men and a woman.

When approached by police, the two men fled, one of whom was arrested quickly but the other was able to escape.

The man, who was armed, ran into a house behind Chatkaew local fresh market, on Soi Rat Bamrung 1, in Khao Noi Subdistrict.

Using his gun to threaten the homeowner he managed to escape into another nearby empty property, opening fire as he fled.

Police quickly surrounded the property and tried to persuade the man to give himself up. The standoff lasted several hours, much to the concern of locals, who were pictured gathered in the street outside.

Police said arresting the suspect was particularly difficult due to him being armed and the location in which he was hiding being so close residential properties.

Police said they even used drones to provide aerial surveillance and monitor the suspect’s possible escape.

It is understood the suspect was finally arrested after several hours. However, police were yet to formally announce the full details of the case at the time of posting.

Hua Hin Today understands that the armed suspect is a 23 year old man who is known to law enforcement and goes by the nickname of ‘Mr Ice’. He has previous convictions for drug trafficking and was only recently released from jail. Officers said ‘Mr Ice’ gave himself up after police asked his parents to intervene. They travelled to Pranburi from Chumphon and persuaded him to surrender.

He has been charged with possession of drugs and possession of a firearm, and are investigating reports Mr Ice sold methamphetamines (commonly known as ice) online.

Police said the armed standoff lasted 20 hours and that 999 methamphetamine pills, kratom leaves and a firearm were seized.