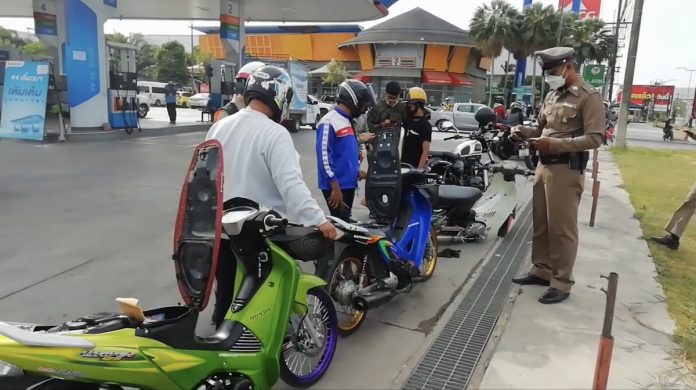 Police were made aware of posts on Facebook that a meet up involving hundreds of riders had planned to attend a merit making ceremony at Thung Kled Rean Baht Temple in Thap Sakae.

Police said many of the riders had travelled from Cha Am to attend the event.

Police suspected that after attending the merit making ceremony, the group would engage in illegal street racing.

Officers were deployed to check the legal status of the riders, and discovered many motorcycles that had violated traffic regulations.

The majority of riders were found to have no license plates and were not wearing helmets. Many of the motorcycles had been modified illegally, police said.

The operation was part of the Royal Thai Police’s promise of cracking down on illegal street racing in Thailand.

In November, a 10 day crackdown on street racing resulted in the seizure of 20,000 cars and motorbikes and almost 1,000 arrests.

Many of those arrested were under 18 years of age, which results in more than 2,500 parents being given probation orders because their children had participated in the street racing.