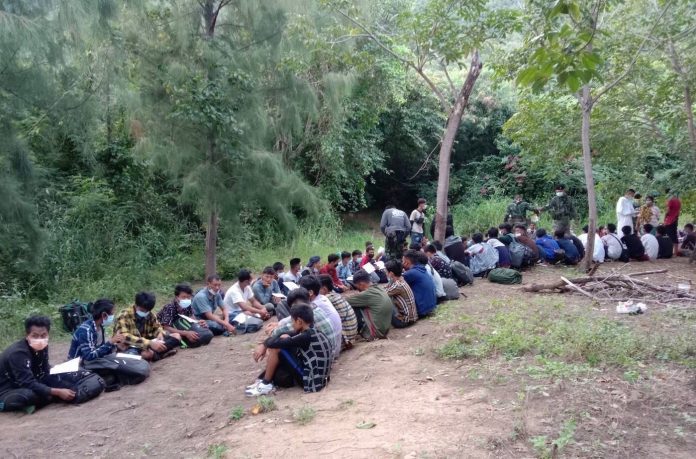 103 Burmese nationals who entered Thailand illegally in Prachuap Khiri Khan have been repatriated back to Myanmar.

On Tuesday (Nov 9) border officials and military personnel from the Chong Ang Suek Task Force handed over 103 migrants to their counterparts in the Myanmar military.

The migrants, 45 females and 58 males, had had entered Thailand illegally by walking over the natural border in Koh Lak Subdistrict in Mueang Prachuap Khiri Khan.

The migrants were returned to Myanmar in accordance to an agreement which is in place between the authorities on both sides of the border. The agreement states that any illegal migrants picked up within three kilometres of the border in Prachuap Khiri Khan can simply be handed back to the authorities in Myanmar.

Officials in Prachuap have said there has been a large number of migrants trying to enter the province illegally in recent months.

The migrants often pay guides as little as 500 baht each to be escorted by foot over the natural border into Prachuap Khiri Khan where they hope to find work.

Due to the large numbers crossing in to the province in recent weeks, police and immigration quarantine facilities are at capacity.

Previously, officials have reported links between illegal migrants and COVID-19 clusters discovered at factories in the province.

Meanwhile, Mr. Wirat Piyapornpaibul, Chairman of the Federation of Thai Industries, Prachuap Khiri Khan Province has called on the government to expedite the problem of migrant labor shortages for entrepreneurs in order to not affect production and exports from the province’s factories.