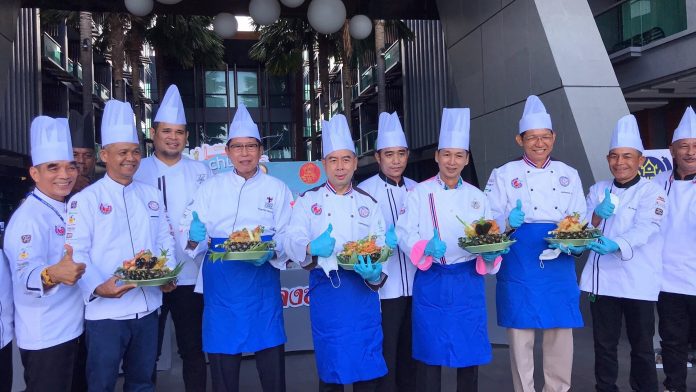 It is set to be a busy weekend in Mueang District in Prachuap Khiri Khan, with the provincial capital playing host to two large scale events.

On Friday, the Prachuap Food Festival 2022 gets underway, with more than 50 vendors and food outlets serving up a wide range of cuisine from the local area.

The three day event is being held at the Chaloem Phrakiat Rama IX Park, which is located next to the provincial hall, in Mueang District, between 16.00 to 23.00. The festival kicks off with the menu of Prachuap Province “Three Bay Pineapple Fried Rice” which will see a total 64 skilled chefs cooking up a special fried rice dish for honored guests and people who attend the event.

One of the highlights of the event is a fresh seafood buffet with shrimp, lobster, crab, and squid for 399 baht per person per 90 minutes, per day from 5:00 PM to 6:30 PM.

There will also be a wide range of OTOP and other locally crafted products on sale, while other entertainment includes a cooking competition to find the best local chef with a total prize money of over 16,000 baht up for grabs.

Each night of the food festival will also include a mini concert from several well known artists including Pause (Sept 16), Burin Boonvisut (Sept 17) and Naem Ronnadet (Sept 18). Tourists to the area are also invited to walk the 396 steps to the top of Khao Chong Krachok – the monastery – which overlooks Mueang Prachuap. Once at you can scan a QR code to receive an electronic certificate to show that you reached the summit.

Meanwhile, tourism officials have also announced the launch of an electric tram service that takes tourists to see the city of Prachuap, with speakers giving lectures along the way.