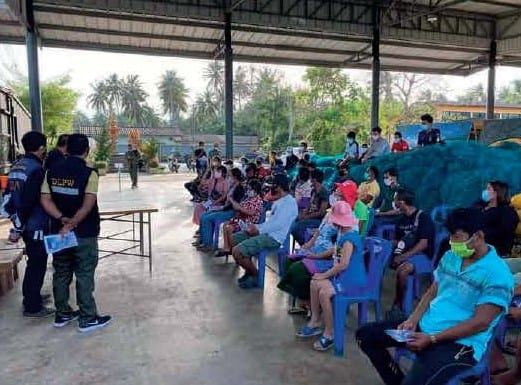 With the outbreak coinciding with the local elections on 20 December, Hua Hin Mayor Nopporn Wuttikul called for an urgent meeting with the Deputy Mayor, Permanent Secretary, Chief of Disease Control and other heads of relevant agencies to prepare for the outbreak emergency situation and enforce safety health measures to the public.

Agencies were instructed to check travel histories of people passing through Hua Hin’s checkpoints on all major routes and to screen their temperatures. Local authorities have started to monitor the health of all migrant workers in the district and do random checks on the number of migrants working at factories and companies in the region.

The number of virus infections have sky-rocketed especially among migrant workers and have spread rapidly to nearby provinces including the capital in less than 72 hours. Hua Hin is only 1 ½-hour drive away from the Samut Sakhon hotspot making this resort town vulnerable to the spread of the virus.

Samut Songkram, Samut Prakan and Nakhon Pathom provinces were immediately placed under lockdown. In the south, the renewed infection has reached Krabi, Phuket and Nakhon Si Thammarat. Anyone who has travelled to high-risk places or show any symptoms of flu must report to the health authorities immediately and undergo a Covid test.

The public was also urged to wear masks in public, observe social distancing and wash their hands frequently. Prachuap Governor Phallop Singhaseni said police forces and health workers have set up screening checkpoints on Petchkasem Road in Bo Fai area and the Petchkasem Foundation Centre along the Bypass Road. 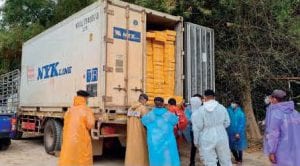 At both checkpoints ensure that passengers wear masks and have their temperatures checked and disclose their travelling history and contact information. Prachuap also ordered suspension of all fishing boats coming from Samut Sakhon and to monitor closely all fishing operations related to the Mahachai shrimp market.

Ms Wariya Yooyen, head of Prevention and Control of Communicable Diseases, and health department officials inspected migrant worker’s camp and work sites in Khao Tao, Hua Na and Nong Kae areas. Hua Hin Hospital has organised a research team to monitor the Covid situation of every hospitals in the district as well as preparing to acquire additional Covid test equipment to support the needs of the hospitals.

The new Covid outbreak is crippling the ailing tourism industry and causes further loss to the fishing and marine industry. Trade with neighboring Myanmar was halted at border at Singkhon channel since 24 December.

An estimated loss of more than 100 million baht has occurred in the past month from the temporary border closure seriously affecting operators as well as the workers. The Singkhon border also daily handles imports and exports to and from Ranong, Kanchanaburi and Tak provinces due to convenience of travelling routes with a trading volume worth 1.2 billion baht in 2020. Mr Wichaphon Phannarat, an exporter of Thai-Myanmar products, said entrepreneurs understood and were willing to cooperate with the strict measures by closing the borders. On 22 December, a 54-year-old woman custom officer from Prachuap Khiri Khan was tested positive for the virus. She had visited her sick mother in the hospital in Samut Sakhon on 13 December.

The woman returned to Prachuap province the following day where she attended a charity meeting at the Singkhon border. She later travelled to Bangkok in her own car on 21 December when she found that her mother in Samut Sakhon had tested positive. After discovering that she was infected, 28 people who were contact with her were all tested and the results came back negative. 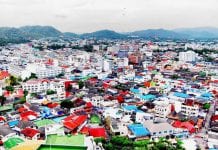 Do you need to quarantine when visiting Hua Hin?