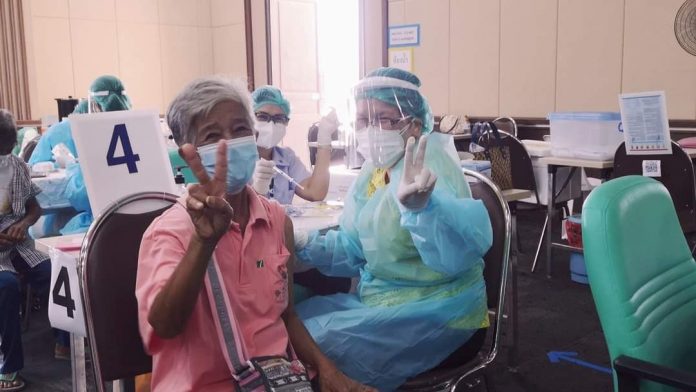 Health officials have said they will accelerate the rollout of the COVID-19 vaccine to people in Prachuap Khiri Khan.

The goal is to vaccination 50 percent of people in the province aged over 60 or with underlying health conditions before the end of August.

Health officials say some people are hesitating getting a vaccine because they are worried about possible side effects.

Because of this, a promotional campaign will be used to raise aware of the vaccine for people in those groups who have not yet registered to receive a jab.

District health officials will also facilitate the administering of vaccines to the disabled or people who are bedridden and unable to attend appointments.

The news comes after it was revealed this week that only 30 percent of local people in the province had received a shot of the COVID-19 vaccine, well short of the 70 percent target needed for the province to re-open to foreign tourists on October 1.

While almost all staff in the tourism sector had received a COVID-19 vaccine, the rollout of the vaccine to other people in the province has not happened at the same rate.

Previously tourism officials set a target of vaccinating 100 percent of tourism workers and 70 percent of locals by September 30.

On Friday, Prachuap Khiri Khan health officials reports a 240 new COVID-19 cases, the majority being linked a cluster at the Takerng fruit factory in Sam Roi Yot, which has now been linked to a total of 371 infections.