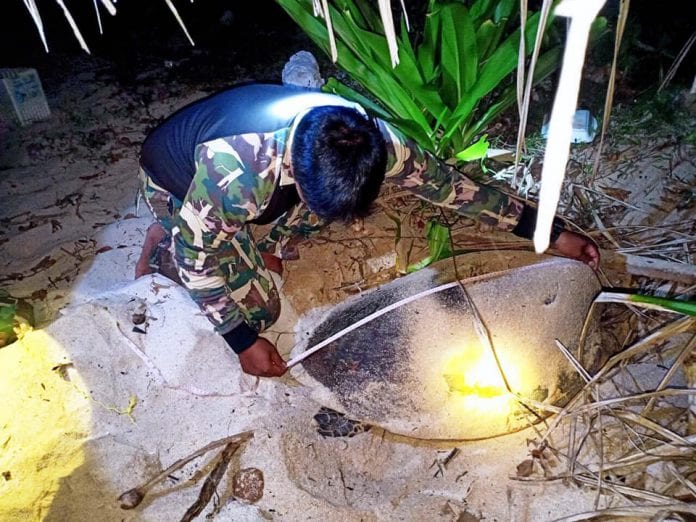 The return of a critically endangered hawksbill sea turtle to an island in Prachuap Khiri Khan is a sign of the province’s flourishing marine life, a conservation expert has said.

Mr Phatara Intharaphairot, Head of the Ao Siam National Park, told Hua Hin Today that the recent return of the sea turtle to Koh Talu to lay its eggs is great news for the region and evidence that the province’s efforts on marine conservation are paying off.

The turtle, nicknamed ‘Mae Thian Talay’ is around 15 years old years old with a body length of 87cm long and 78 cm wide. It is the fourth time it has visited Koh Talu, located off the coast of Bangsaphan Noi, to lay eggs.

Mr Phatara said that in a previous visit in 2019, the turtle was microchipped, so staff at the national park working in conjunction with the Siam Marine Resources Restoration Foundation have been able to monitor the turtle’s location and collect data during the visit. On this occasion, the turtle had a total of 73 eggs, 67 of which were intact and moved to a nursery site by park staff for monitoring until they are ready to hatch, at which point they will be returned to the sea.

Since 2009, a total of 9 female turtles have visited Koh Talu to lay eggs, Mr Phatara said.

The rare hawksbill sea turtle is a protected animal in Thailand in accordance with the Wildlife Preservation and Protection Act B.E. 2562.