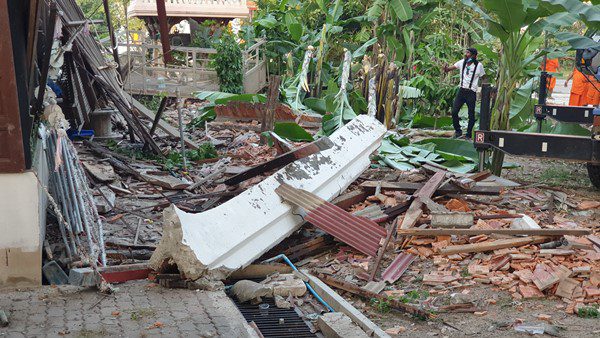 More than 2 million baht’s worth of damage was caused after the roof collapsed at Cha Am temple on Wednesday (Dec 8).

The roof, which measures 4 meters wide and 30 meters long, collapsed shortly before 5pm.

The Disaster Prevention Officer of Cha-am City Municipality inspected the scene and found extensive damage to the wooden pavilion and monk’s cloister, with debris including tile fragments and roof beams scattered around the pavilion.

It is believed that strong winds and the sheer weight of the roof, which is thought to have weighed around 5 tons, was too much for the more than 60 year old wooden beams of the temple to withstand, which caused the roof to collapse. A monk who was inside the temple just before the roof collapsed said he was sitting at the pavilion receiving offerings from a couple and their child when they heard sounds from the roof beams above that suggested the beams could be about to break.

They then exited the temple building shortly before the roof collapsed.

The cost to repair the damage is estimated to be about 2 million baht.

Anyone who plans to make merit at the temple can make a donate towards repair the roof can donate via account number 7171364801 or contact Abbot Amnat Thanisaro.