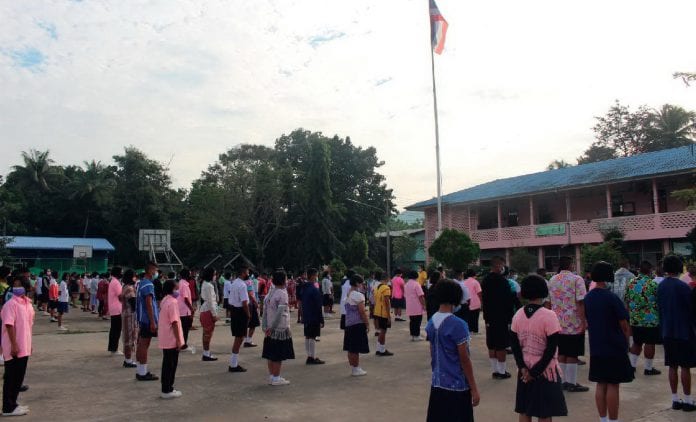 Provincial Deputy Governor Chatri Chanveerachai visited Anan School at Huai Sat Yai Subdistrict to follow up on the needs of the school that even includes protection from roaming wild elephants.

Mr Chatri was following up projects introduced by Privy Councillor Air Chief Marshal Chalit Pukphasuk during his recent visit to the school.

Wild elephants roam the surrounding country and intrude into school areas to search for food, presenting a danger for school children. Huai Suea Yai district has built a fence around the school making it now safer.

Hua Hin District will allocate a budget for growing food source for wild elephants to deter them from intruding into the village.

As drinking water was insufficient at school, the district bought five water tanks with the deputy governor providing five more making a total of 10 water tanks (20,000 litres) for the school’s daily use.

A budget to extend electricity lines into the school area and installing water filters for drinking has also been allocated. As accommodation for teachers in houses provided is not enough and some houses starting to deteriorate, Mr Chatri noted it for improvement in the near future.