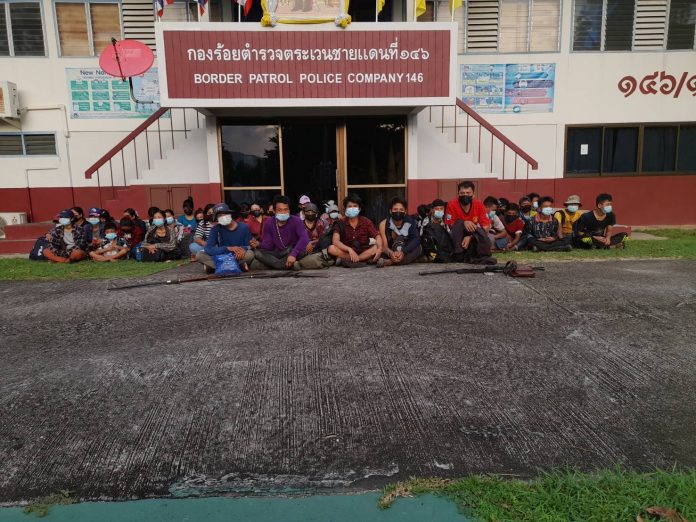 Thai security forces detained 45 people for illegally entering the country near the border with Myanmar in Prachuap Khiri Khan.

On Saturday (Oct 30), officers from Border Patrol Police 146 along with local government officers and immigration officials conducted patrols to intercept illegal immigrants along the Thai-Myanmar border.

The patrols focussed on the Sip-Sop natural pathway in Muang Prachuap, a notoriously difficult stretch of the border to police due to the terrain and its openness which makes it easy for people to travel across to enter into Thailand.

The pathway is frequently used by traffickers to bring illegal migrants in to the country.

The patrol apprehended 45 people including 5 guides who were armed.

Investigating officers found that the group had travelled from Dawei Province and Tanao Si District in Myanmar. They had been due to meet a contact on the Thai border who would then take them to Samut Sakhon Province and Prachuap Province where they would work.

All those arrested were sent to Khlong Wan Police Station in Prachuap where they will be detained for 14 days before being returned to Myanmar.

Earlier this month, border officials revealed the continued and ongoing battle of apprehending illegal migrants during the pandemic.

Officials say there is a large migrant camp in the Tanintharyi region of Myanmar, located not far from the Singkhon checkpoint.

Migrants from the camp pay a broker as little as 500 baht each to be smuggled over the border.

The migrants are guided through plantations and pathways along the natural border which are very difficult for Thai officials to patrol.

There is even a supply network that provides the brokers and migrants with food and shelter as they make their journey over the border, officials said.

Those that are caught are then returned to Myanmar before the whole process starts again.

The news comes at the same time health officials have spoken of the recent spike in COVID-19 cases in the province, predominantly found amongst migrant workers at factories and industrial plants in Pranburi.