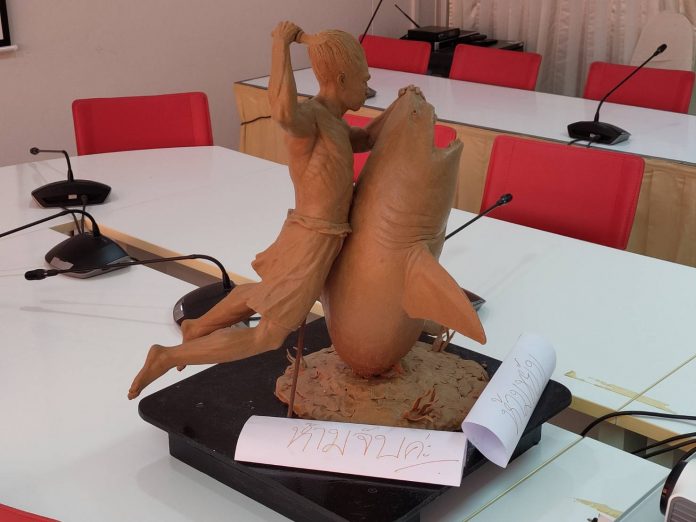 A three meter tall statue of a man fighting a shark, which officials hope will become a new cultural landmark, is set to be built in Hua Hin.

The statue will be constructed near the Chao Pho-Chao Mae Thapthim Shrine which is located close to the Hilton Hotel in downtown Hua Hin. Unveiled at the meeting was a miniature clay model of the statue which was designed by Mr. Kittichai Treeratwitcha, a professor at Silpakorn University (Wang Tha Phra) in Bangkok.

The real version will be 3-4 meters tall and cost around 3 million baht, excluding the base.

Mr Nopporn said that the statue must have presence, be strong and made from high quality metal such as bronze.

Mr. Boonkerd said the shrine will also be making a contribution towards the construction costs of the statue.

Mr Nopporn said that once built, the statute will become a new landmark and attraction for both Thai and foreign tourists.

Why the ‘shark fighting man’? For many years there was a statue of a man fighting a shark located near the Clock Tower and Hua Hin Temple.

That statue dated back to 1961 and was the idea of Mr. Wiboon Wongsuwat, who was mayor at the time. He wanted the statue to become a landmark for Hua Hin. There is no real historical or cultural significance as to why the statue depicts a man fighting a shark, other than it was the wish of Mr Wiboon.

The statue was later moved to a new location near Mae Thapthim Shrine but fell into disrepair.

About three years ago money raised from the private sector saw the construction of another statue but that also got damaged.

Officials say the updated version will be bigger and grander and will become a landmark of significance in the local area once more.

Discussions will continue as to exactly when the new statue will be built.