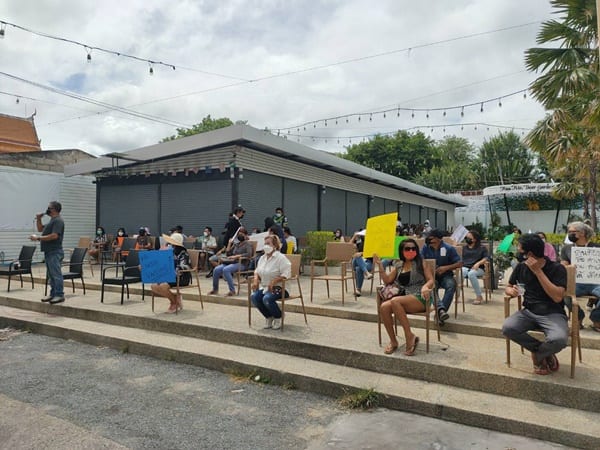 Members of the organisations say workers in Hua Hin’s entertainment industry have received no support from anyone in authority throughout the COVID-19 pandemic and have been forgotten in the vaccine rollout.

The group say as many as 1,200 people in Hua Hin are affected.

The event on Saturday was used to for the groups to formally present a letter to the PM requesting help in securing vaccines for entertainment workers in Hua Hin.

The letter, which has also been sent to Hua Hin’s mayor and the provincial governor, was handed to Hua Hin deputy district chief Montri Manichpong who visited the rally on Soi Bintabaht. Those who joined the protest held placards which called on the authorities to speed up the vaccine rollout in Hua Hin, as well as demanding financial support from the government.

The protest comes as bars and pubs have been ordered closed to help prevent the spread of COVID-19.