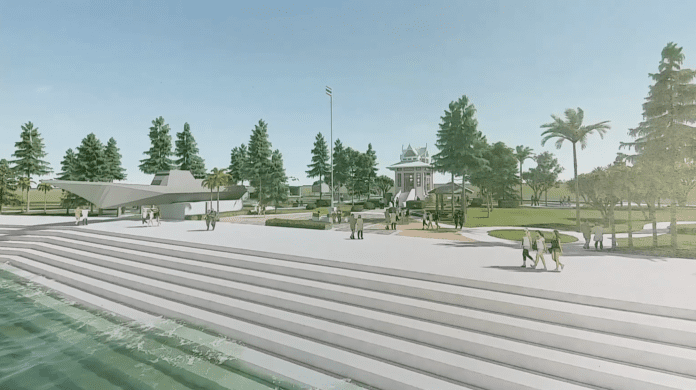 Proposals have been put forward for a 144 million baht dam to be built along the shoreline in Pak Nam Pran in a bid to stop coastal erosion.

As part of the Pranburi Beach Coastal Erosion Prevention Dam Project, the dam, which would be constructed in the form of steps from the shoreline into the sea, would stretch some 888 meters along the coast in Pak Nam Pran, Pranburi district. On Monday (Feb 7), provincial officials and state officials including the Deputy Governor of Prachuap Khiri Khan Province, Mr. Komkrit Charoenpatanasombat and Mr. Sompong Jirasirilert, Deputy Director-General of the Marine Department, met with locals at the beach to discuss the project.

Chair of the Pranburi Beach and Sea Lovers Group, Mr. Phitsanupong Laolabyost, told officials that the dam should not be built in zone 3, which is the beach area in front of the Prince Chumphon Khet Udomsak’s Shrine – a place of worship, particularly among local fishermen.

Mr. Phitsanupong said the beach in zone 3 is approximately 203 meters in length and that there is minimal coastal erosion in that area. He said that the construction of the dam would ruin the beach and could pose a threat to the environment.

Mr. Phitsanupong acknowledged the need for construction of the dam in zones 1 and 2, as he said those areas had suffered real damage from coastal erosion. However, he said another solution should be found for zone 3.

While the majority of locals agree to the project, what to do about zone 3 will be discussed further at a provincial meeting. Officials said they will consult academics on the best course of action for the area.

Coastal erosion is a major problem in both Phetchaburi and Prachuap Khiri Khan.

Officials say some 200 kilometres of coast in Prachuap Khiri Khan is affected by erosion.