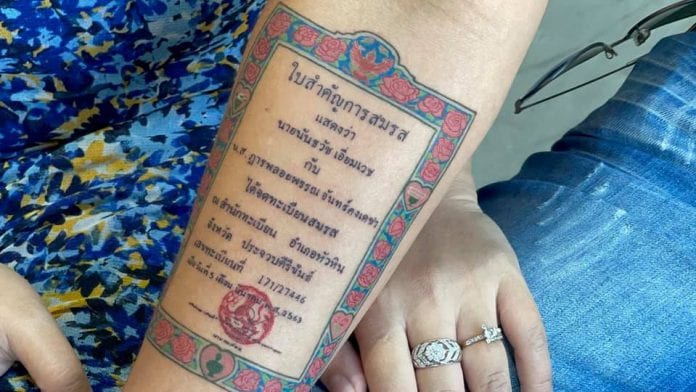 A Hua Hin man is unlikely to be straying very far from his wife who he married last year.

Nantawat or Geng, 34, told Prachuap Post that he had always been into tattoos and when he went on the internet and saw someone had done a Thai marriage certificate for him it was a no brainer.

He had to have one too, to show his undying love to his sweetheart Um-Im, 31.

The couple who have a restaurant together in the Hua Hin area, got married in March last year after she got pregnant. They had known each other for three years.

Geng went to Jak Tattoo a shop he has known for years and entrusted a lady tattooist called Jirarat, 27, to do the work.

It was a very tricky job said the tattooist who has been in the trade 5 years.

It took six hours to complete on Friday and looked perfect in every respect. They had to be careful there were no spelling mistakes and the real name of the wife is extremely long.

Geng said he put it on his right arm as his wife was as important as his limb and he always wanted to be reminded of being married especially if they argue or fall out.