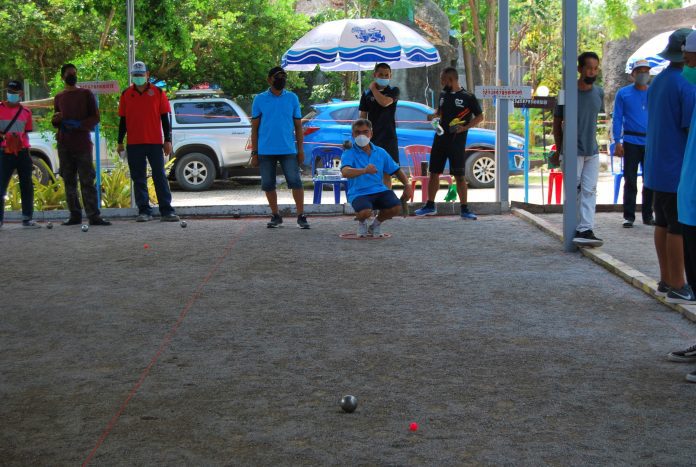 Petanque might only have a niche following in Thailand, or indeed anywhere else outside of its native France, but in Hua Hin its popularity among expats and Thais is thriving.

At the Sabai Cafe & Bistro in Thap Thai, not far from the Immigration office, scores of French expats meet up six days a week to play petanque and socialise.

A combination of French expats wanting to meet other French expats in Hua Hin and a willing business owner who quickly recongised the demand for a dedicated petanque venue has seen the Sabai Petanque Club really grow as a community.

“I never played petanque in France and only started playing in between one of the COVID lockdowns after being invited by a friend,” Laurent said.

As many as 40 or 50 expats are playing petanque at the Sabai resort each day.

“People play petanque but I think most people mainly go to socialise and speak French with one another, Bernard said.

“We have some people who don’t play petanque at all and just visit to hang out”.

Games normally get underway from 2pm every day apart from Wednesday, with some staying for as long as three or four hours.

“It’s not only French people who play, we also have a few Germans and some Thai people too,” Bernard explained.

The games between 2pm and 5pm are just for fun but after 5pm, things get a little more serious when the better players play against one another.

It costs 30 baht to play and that includes a free bottle of water. Yearly memberships are available for 1,000 baht. Khun Srisamai Chueachat, owner of the Sabai Cafe & Bistro says the resort now has a total of 14 petanque courts, 3 of which are covered by a roof.

“I first had the idea to build a petanque court as a way to offer something different for my guests”, Khun Srisamai explained.

“Around the same time, I saw a group of people playing petanque on a makeshift court on the side of the road near the resort”.
Khun Srisamai then approached the group and spoke to other local players who advised her about how to set up a court.

Just a few months later and the Sabai Cafe & Bistro has enough petanque courts that it is able to hold large scale tournaments. A tournament held earlier in March attracted 64 teams and more than 150 players, with the Thai national team and a team from Monaco taking part.

Regular tournaments are now set to be held throughout the year.

Khun Srisamai says local teams from all over the province come and play at the resort, as well as the predominantly French expats who play daily.

“They love playing petanque so much, they were even playing in the rain!”

“That’s when I decided to build a roof over some of the courts, to stop them from getting soaking wet during the rainy season”, Khun Srisamai explained.

There are plans to build more courts in the coming months.

Anyone interested in playing petanque in Hua Hin can visit the Sabai Cafe & Bistro in Thap Thai or check out the Petanque Hua Hin group on Facebook.