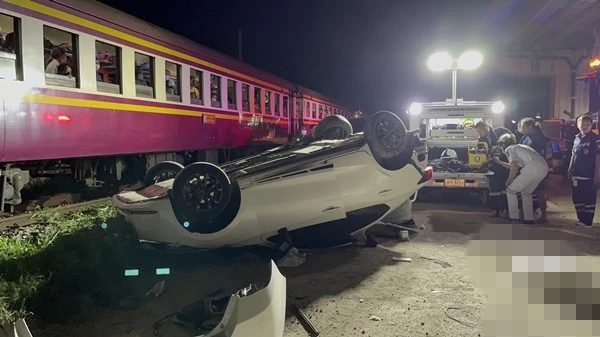 Three people were killed and another seriously injured after the car they were travelling in was hit by a train at the level crossing on Soi 94 in Hua Hin early on Thursday morning.

The accident happened at approximately 4am when a white Mazda sedan was hit by the No 86 express train which operates between Nakhon Si Thammarat and Bangkok.

The train had been travelling south after stopping Hua Hin Train Station.

Rescue workers attending the scene, which included first responders from Sawang Hua Hin Thammasathan Foundation, officers from Hua Hin Police Station and medical personnel from Hua Hin Hospital, found the Mazda overturned. One of the deceased was found inside the Mazda, the others had been thrown from the vehicle.

A fourth person was found to have suffered serious injuries and was cut from the vehicle before being rushed to hospital.

One of the deceased was a senior officer from Hua Hin Police Station.

Investigators are working to ascertain how and why the accident occurred.