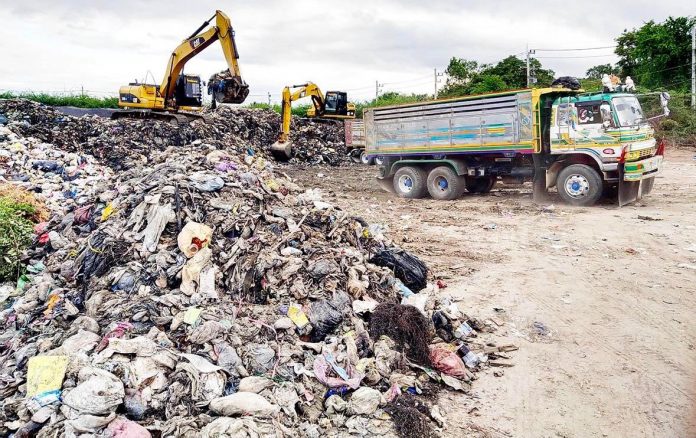 People living near a controversial rubbish dump located close to housing developments on Soi 102 have welcomed its closure.

On Friday (Aug 6) Hua Hin’s Mayor Nopporn Wutthiku oversaw the removal of some 2,000 tons of garbage from the site off Soi 102.

Hua Hin Municipality had been dumping waste on the controversial site since July 1 after a 20 year agreement to use a landfill site at the Thanarat Infantry Camp in Pranburi came to an end.

With officials unable to find a suitable alternative location, a decision was made to use an 8 rai plot of municipal owned land on Soi 102 as a temporary landfill site.

However, due to its close proximity to several housing developments, such as Laguna and Suksabai, within days locals complained about the smell and voiced concerns about the dump being located so close to their homes.

Videos supplied to Hua Hin Today revealed just how close the dump was to nearby properties.

Meetings were then held between the mayor and local residents, with Mr Nopporn assuring those in attendance that municipal officials were working hard to find an alternative site.

Last month, Mayor Nopporn announced that the municipality had reached an agreement to use a site in Nakhon Pathom, some 200kms away from Hua Hin. On Friday, municipal staff began to remove the trash from the Soi 102 site.

Ten large trucks and two backhoes were used to remove the trash, while disinfectant was sprayed on the remaining trash to prevent it from smelling, someone familiar with the project who spoke on the condition of anonymity told Hua Hin Today.

The trash will be transported to a private site – an old gravel pit – in Thap Thai, officials said.

From Monday (Aug 9) twenty trucks will be used to remove the remaining trash.

Once removed the site on Soi 102 will undergo deep cleaning to reduce both the health and environmental impact on the local area.

A resident at the Laguna development told Hua Hin Today she was delighted the municipality had started to remove the trash.

“It (the trash site) was a real concern”, the woman said.

“We could not sit outside and had to close all of the windows in our house because of the smell”.