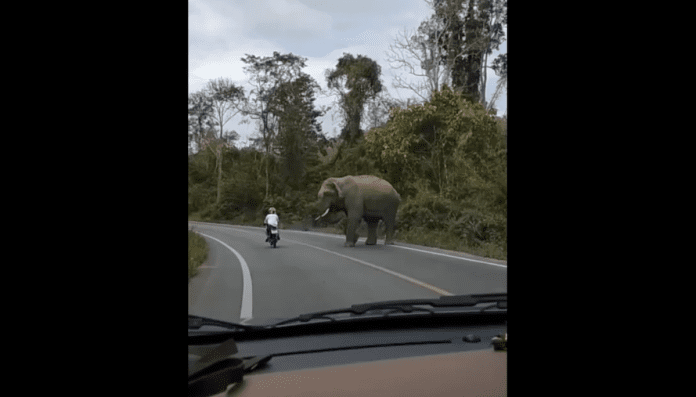 A motorcyclist in Hua Hin had a fright when he had a close encounter with a wild elephant.

The incident, which was caught on video, occurred last week in the Huai Sat Yai Subdistrict of Hua Hin, in the Kaeng Krachan National Park.

Footage shows the elephant confront the motorcyclist who turns to drive in the opposite direction.

However, the motorcyclist doesn’t drive away quite far or fast enough for the elephant’s liking who makes another charge before appearing to spray dust, presumably in a sign of anger.

Pichai Watcharawongpaiboon, director of the Third Conservation Area Administration Office in Phetchaburi said his officers inspected the area after being informed about the incident.

Mr Pichai said the elephant in question is the now famous Plai Boonchuay, a local male who has built up quite a reputation in recent months, namely for breaking into a local resident’s home to steal food not once, but twice.

Plai Boonchuay was also thought to have rammed the pick up truck of a woman driving workers to a nearby fruit processing factory.

Mr Pichai said that the elephant had actually been distressed by two motorcyclists on the road, as well as the vehicle containing the person who was videoing the incident.

Mr Pichai didn’t blame the passers by for the incident but advised motorists to drive slowly and keep a distance of between 5 to 10 metres away from any elephants they may encounter on the road.

They should then drive away slowly from the elephant so as not to startle or provoke the elephant further, Mr Pichai said.

Mr Pichai said it is not uncommon for elephants to appear on the road towards Pala-U waterfall and urged motorists to be cautious when driving through the area.

He added that a sign an elephant is in a good mood is if its tail is swaying back and forth.

He said that elephants which can be seen on the road normally go back into the forest and away from the road of their own accord.