After some heavy monsoon rain last weekend, a pile of trash was swept in by the waves from the Gulf of Thailand into Hua Hin Beach. A distance of almost 10 kilometers of trash were scattered along the coast which made locals and tourists reluctant to go for a swim. However, the Hua Hin Municipality is preparing to clear out all the trash by today’s end.

This incident occurs every year especially during the end of rainy season and the beginning of winter along the coastline.  Caused by the changing wind direction to the northeast during the end of the raining season and the beginning of winter season, during on September – November, which is the monsoon season coming from in the west coast, causing rubbish came in the Gulf of Thailand and this year there was a flood so there was a lot of garbage went into the sea as well. 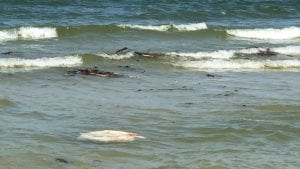 Most garbage are natural waste from the drainage and from the rivers and canals then enter in the Gulf of Thailand, which are scrap twigs, the coconut tree, Coconut balls, , plastic, foam, bottles, glasses, and some of which are household utensils, which of course makes Hua Hin beach not beautiful, but today Hua Hin Municipality will urgently collect waste.