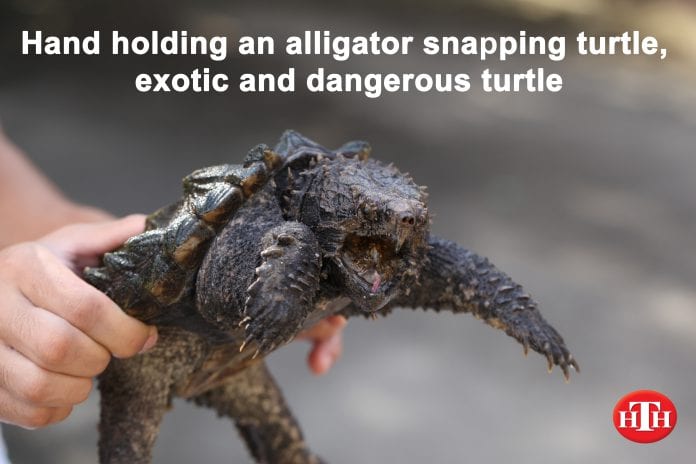 9th March, Prachuap Khiri Khan – At Pranburi District, villagers found a strange-looking turtle had attached to the fish traps that the villagers had placed to trap fishes, with nearby villagers were gathering up to see the strange turtle.

Beforehand, they encountered a turtle-like this in the Pranburi River as well, but it was larger in size than this one.

The alligator snapping turtle (Macrochelys temminckii) is a species of turtle in the family Chelydridae.

The species is native to freshwater habitats in the United States M. temminckii is one of the heaviest freshwater turtles in the world. It is the largest freshwater species of turtle in North America.

Assuming that somebody adopted it from a young age several years ago and might be boredom then the turtle was released into natural water and caught by the villagers.

Assuming that somebody adopted it from a young age several years ago and might be boredom then be released into natural water and caught by the villagers.

Mr Sanya the person who found the turtle said he had gone out to trap the fist in the Pranburi River as usual, and the next morning came to salvaged the trap and felt the fish trap weighted more than usual.

When he lifted it he encountered a strange turtle, he reported to the district fisheries to come to check immediately.

The Pranburi District Fisheries has sent officers to inspect and took the turtle to the Phetburi Inland Fishery Development and research.

This Alligator snapping turtle captured by the villager is a rare and ferocious freshwater turtle and is the largest species of turtles in the world, most found in the eastern and southern parts of the United States.