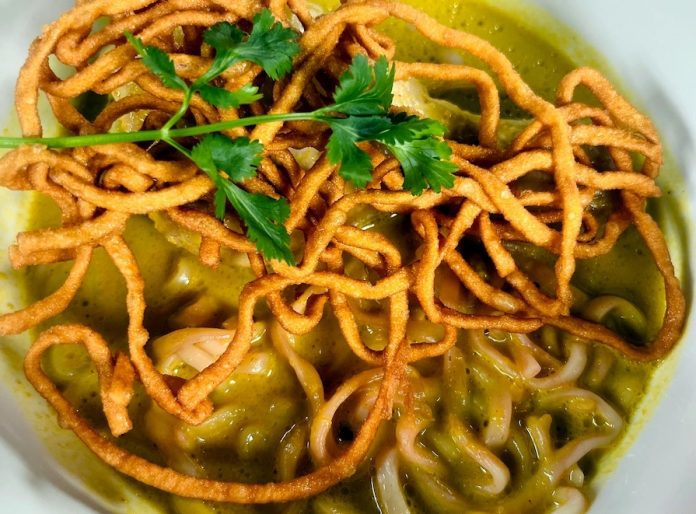 The popular northern Thai dish Khao Soi has been ranked as the world’s best soup, according to the online international food database TasteAtlas.

The popular dish scored a rating of 4.9 out of 5 stars in the website’s ranking of 50 best soups.

The website described Khao soi as “a signature dish of Northern Thailand”, which is “a delicious coconut soup in which numerous regional influences were combined to create a truly spectacular dish. The base of the soup is a slightly spicy broth which combines coconut milk and red curry paste”.

“The broth is served with flat egg noodles and a choice of meat, which usually includes chicken, beef, and pork. It is topped with a handful of crisp fried noodles and chopped cilantro. The dish is commonly served alongside a variety of condiments such as fresh lime, pickled cabbage, shallots, and chilis”.

“Even though the dish originated in the north of the country, it is still not totally clear how and when this famous noodle soup was created. The most probable theory claims that khao soi is a fusion dish which originated under the influence of Chinese Muslims, traveling from the Yunnan region through Myanmar, Thailand, and Laos”.

Despite being a traditional dish of the north, Hua Hin has more than its fair share of places serving up excellent Khao Soi.

Rather than aim to find the ‘best’ Khao Soi in Hua Hin, the aim of the tour was to highlight the different varieties of Khao Soi available locally.

In fact, it was the different varieties of Khao Soi we discovered during the tour which was really interesting.

“Like all Thai food, good Khao Soi is all about texture and flavour”, said Leigh Higgins from Feast Thailand.

“We are actually really lucky in Hua Hin that the 4 regions of Thai cuisine – central, Isaan, north and south – are covered really well.

“That’s why we are able to get quite authentic and traditional versions of Khao Soi here, despite it being a northern Thai dish, which isn’t necessarily the case in other areas of Thailand,” Leigh explained.

First stop on our mini Khao Soi tour was At Phrae, the restaurant in Khao Takiab which specialises in northern Thai cuisine.

The restaurant, which is located almost opposite Wat Khao Lan Thom, served up a delicious bowl of Khao Soi.

We tried the chicken version (60 baht) but they also sell beef and pork versions (both 70 baht). Most notable was the size of the portion, which was really generous.

In terms of flavour, while it isn’t an overly spicy dish anyway, the Khao Soi from At Phrae is perhaps made with a foreign palette in mind. The portion we tried was nice and flavourful without too much spice.

At Phrae is located in Khao Takiab and you can find them on Facebook.

They are also on Grab and Foodpanda.

Next up was Khao Soi Wan Phen which is located on Phetkasem Road opposite Klai Kangwon Palace.

It was Hua Hin’s first Khao Soi restaurant and has been open since 1993.

Born in Lampang in northern Thailand, owner Khun Wan Phen (Wanphen Chamratsakul) said she opened the restaurant to be closer to her ‘father’ the late King Rama IX, who was known to spend time in Hua Hin.

“This is as traditional as Khao Soi gets outside of the north”, Leigh said.

The Khao Soi from Wan Phen’s had a ‘meatier’ more intense flavour, despite being a little lighter in consistency compared to the versions we tried. It also had the addition of coconut milk poured on top which was not present in the other versions. The portion was actually a little smaller in size but still more than enough for lunch time.

Khao Soi Wan Phen was quiet when visited (on a Wednesday lunchtime) but it can get notoriously busy at the weekend with tourists from Bangkok. Chadakaew is located down a side soi past Hua Hin School on the Pala-U Road, almost behind the Big C supermarket.

The restaurant has an extensive menu of northern Thai dishes but Khao Soi is one of its most popular.

The Khao Soi at Chadakaew was again noticeably different from the other versions we tried.

“There is more turmeric in this one and there is a stronger taste of ginger too”.
Open daily from 10am to 9pm

Praca at The Standard, Hua Hin For a more contemporary take on Khao Soi head to Praca at The Standard Hua Hin.
The Khao Soi there has a nicely balanced flavour alongside some very tender beef.

The deep fried noodles were particularly good too, crunchy but fresh.

As for the setting, with its front row ocean views, you’d be hard pressed to find better in Hua Hin.

A big thanks to Feast Thailand – Hua Hin’s #1 Food Tour Company – for showing us the different variations of Khao Soi in Hua Hin. For more information visit Feast Thailand