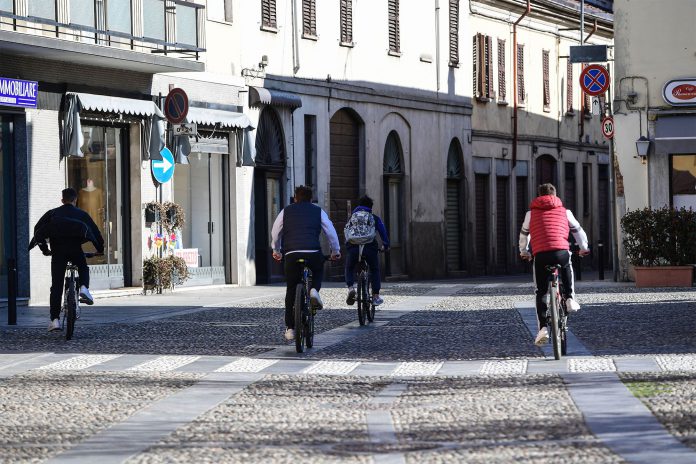 I don’t think it’s really hit me yet,” says Maria Vittoria Falchetti, who works for her family’s firm in the northern Italian town of Codogno, in the epicentre of the country’s brutal coronavirus epidemic.

Her father Umberto, founder of a car components business, has become one of the casualties. The 86-year-old died in hospital from the virus, with the isolation rules not allowing his family to be with him.

“I’m still in quarantine and working from home. But I dread the day when I go back to the office.

“My office is next to his. He kept this little purse in his drawer and I used to hear every time he took out some coins. I knew he was going to get a coffee from the machine,” she says.

“I will miss that noise.”

The lack of noise can be deafening. Quiet streets, empty public transport, bars and restaurants that have closed, self-isolating families and locked-down cities have become part of the strange days of this Covid-19 pandemic.

Private grief such as Maria Falchetti’s comes as public life seems to be falling apart.

If the world is holding its breath to see what happens next, Codogno, a small town in Lombardy, is a microcosm of how the virus can overrun a community – and how that community can fight back.

One month ago, when coronavirus was first detected in the town, even the idea of locked-down towns guarded by police checkpoints would have seemed like something from a paranoid disaster movie.

Two days after the outbreak was confirmed in Codogno, everyday, modern, globalised 21st-Century life in the town had come to a halt. From being a 1,000-year-old town with cafes and old churches, it became the place where “patient one” – the person at the start of a chain of contagion – was infected. 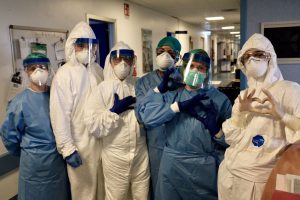 People accustomed to going wherever they wanted found themselves ordered to stay behind a new frontier. They had become mask-wearing residents of a quarantined “red zone”, a firewall to stop the disease.

One of the most surprising things was how quickly people adapted, says Roberto Cighetti, a science teacher in the town.

“The priorities become clear – food, health, family. That’s it. You adapt in a moment,” he says.

If Italy’s journey into Covid-19 is a few weeks in front of the UK’s, there are clues about the road ahead.

Cighetti says panic buying was one of the first social symptoms of the epidemic.

“It’s difficult to behave well under pressure,” he says. What stopped people hoarding food was when the supermarkets demonstrated there was no shortage – by constantly and visibly re-stocking shops.

The next social challenge was an eruption of fake news. WhatsApp groups were pinging with the spread of hoaxes, false cures and conspiracy theories.

“There is an instinct to spread news without verifying it, so there were rumours that were totally fake,” says the science teacher. “They created anxiety and panic and lowered the level of trust.”

Cighetti was so worried that misinformation was disrupting authentic public health advice that he took to social media with other scientists to try to counter the fake facts.

Local people have suffered from an “epidemic of information”, he says, both useful and fake.

That might be a by-product of another unwanted piece of history about this outbreak. As epidemiologist Professor David Heymann says, this is the first time that we’re within a pandemic that “we can follow in real-time”.

There was also the social distancing to get used to – and that could have its own psychological isolation, says Cighetti. “The distance translates into an emotional distance.”

The coronavirus has shown how vulnerable and fragile our interconnected world can suddenly become. But the same modern communications are keeping people together.

There have been remarkable online eruptions of solidarity. Italy has had its own instant festivals of singing and music from balconies, with an opera singer delivering Puccini over the rooftops of Florence like some kind of epic soundtrack.

Italians have also taken to raising an online glass to the friends they can’t see in person. The “aperitivo” after-work drink has switched to Instagram.

In Paris, people stuck inside their homes are opening their windows for synchronised night-time rounds of applause for medical workers. This clapping and cheering, echoing around the empty streets, comes from thousands of people who are separated and together at the same time.

In the UK, social media is being used to prepare for the storm ahead, sharing ideas to help the elderly or isolated. A Covid-19 Mutual Aid group is supporting hundreds of local efforts and neighbours have been signing up to WhatsApp groups to offer assistance.

If the Italian experience is any guide, there will be mood changes in public responses to the coronavirus, with the seriousness not necessarily evident at first.

At the start of Codogno’s strange new life of the lock down, Cighetti says it felt like a “boring holiday”. The schools had closed, the bars and restaurants had shut, streets were empty, no-one was able to travel.

There were even positive sides.

In the red zone, apart from those who were ill or self-isolating, people could move within the town and the enforced break meant “families spending more time together, walking, cycling, walking the dog, baking cakes,” says Cighetti.

Pupils missed being at school and the science teacher says that when they had online lessons children actually seemed more engaged than usual, appreciating the return of normality.

But Covid-19 was stalking the town – and Cighetti says the rise in deaths and illnesses meant the atmosphere changed from complaining about disruptions to work and cancelled trips to something much darker.

The isolation zones made grieving even more traumatic, with families unable to reach the funerals of even their closest relatives. A son couldn’t get to the funeral of a mother.

There have been economic shockwaves too, rippling out from fears for restaurants in Codogno through to multi-nationals and tourist industries across northern Italy and beyond. According to the International Labour Organisation the virus will destroy 25 million jobs worldwide.

In the globalised supply chain, the disruption to local businesses can have international implications. The firm founded by Maria Vittoria Falchetti’s father produces electronics components for the car industry – and its shutdown threatened a domino effect, until an exception was made to allow production to resume.

The Lombardy lockdown, seen as a draconian measure by international standards when it was introduced, appears to have succeeded in significantly reducing the number of new cases in Codogno. There is some light in sight.

Local mayor Francesco Passerini said the town had given a “virtuous” example to the rest of the country.

“It’s a war. But we have every possibility of winning. Unlike with our grandfathers who went physically into battle for our freedom, we are being required to show responsibility – responsibility and calm,” said the mayor.