On December 16th, 2021, The United Nations Education, Scientific and Cultural Organisation, (UNESCO), officially listed ’Nora’, a traditional folk dance drama from southern Thailand, as Thailand’s ‘Intangible Cultural Heritage of Humanity’ at the 16th session of the Intergovernmental Committee for the Safeguarding of Intangible Cultural Heritage, held online from December 13th to 18th.

The announcement confirms that ‘Nora’ will be added to Thailand’s list of UNESCO Intangible cultural heritage, alongside Khon traditional masked dance, (2018), and Thai massage, (2019). Nora is a lively and acrobatic form of Thai dance theatre and improvisational singing deriving from southern Thailand. A long oral invocation is usually followed by a presentation by a lead character who dances with vigorous and elaborate movements of the legs, arms, and fingers, typically, the p e r f o r m a n c e s a r e based on themes about Buddha’s past lives or legendary heroes.

An ensemble performs music that is highly rhythmic and fast-paced, with a melody provided by a traditional southern oboe and strong rhythms produced by drums, gongs, cymbals, and wooden clappers. Nora costume is made of beads in various colours arranged in patterns and motifs, to be worn as a shirt, other components and decorations are a pair of wings attached to the costume, a pendant, a decorative tail wing, wrap-around skirt, a pair of calf-length trousers, front-hanging pieces of cloth, side-hanging pieces of cloth, armlets, bracelets and fingertip extension pieces.

These are the costume and decorations for the principal character, who is called the Nora yai or Nora yuen, while the khrueang nang or the costume for the female characters does not have armlets, pendant, or wings. Nora dance choreography varies by location, but it generally consists of 12 positions and 17 moves. Its appeal stems from its sophisticated motions, which include angular movements, wide-open leg postures, and incredibly expressive finger gestures defined by long fake nails, the dancers do not walk ’Nora’ joins Thailand’s Intangible Cultural Heritage of Humanity but slide their feet, resulting in a spectacular show.

For the inhabitants of southern Thailand, Nora is a community-based tradition with significant cultural and social importance, regional dialects, music, and literature are used in performances to strengthen cultural life and social relationships among locals. Nora, which is almost 500 years old, is performed in centres, temple fairs, and cultural events, and is passed down from generation to generation through masters’ training in homes, community organisations, and educational institutions. 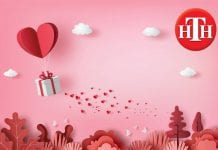 Valentine in the midst of Covid