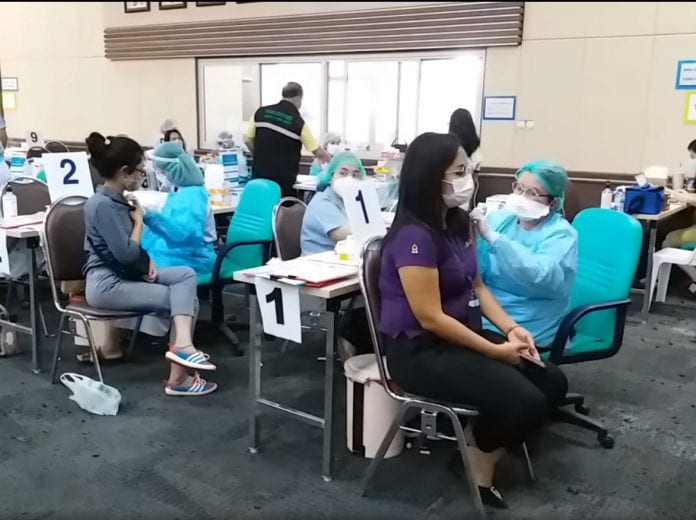 Health officials in Prachuap Khiri Khan have now administered more than 100,000 COVID-19 vaccine doses, according to data from the provincial public health office.

The milestone was reached as vaccinations were being administered at Prachuap Khiri Khan Hospital on Monday (July 19).

The recipient of the the hundred thousandth dose was a Ms. Yothaka Poonsawat, an employee at Prachuap Wittayalai School, who was returning to receive her second vaccine dose.

Ms. Yothaka explained how she had received a dose of the Sinovac vaccine on June 28 and returned today for a dose of the AstraZeneca jab.

Ms. Yothaka told local reporters she was not apprehensive about getting the vaccine or even mixing two different vaccine brands. She invited others to get vaccinated as soon as possible, saying that the alternative could be much worse, especially with rise in cases of the so-called Delta strain of the virus.

Health officials said that more than 6,000 people in eight districts of Prachuap Khiri Khan received the second vaccine dose on Monday, which was predominately the AstraZeneca vaccine.

On Tuesday, 14,274 people in Prachuap Khiri Khan – mainly the elderly and suffers of one of seven chronic diseases – are due to be given the first dose of the Sinovac vaccine.

Despite reaching the milestone of 100,000 doses administered, Hua Hin Today estimates that less than 30,000 people in the province are actually fully vaccinated, having received two vaccine doses.

This equates to approximately less than 10% percent of the 70% vaccination target officials aim to administer before October 1 – the date that Hua Hin is due to reopen to vaccinated foreign tourists.