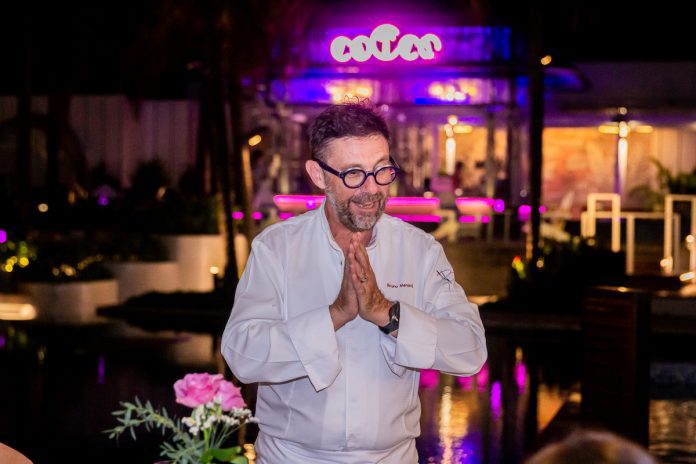 The 3-star Michelin chef Bruno Menard was at the InterContinental Hua Hin for one night only on Friday, July 22. Chef Bruno, who has been in Asia for more than two decades, was at the helm of L’Osier in Tokyo, owned by a renowned Japanese cosmetic company, Shiseido, when it was awarded 3 stars in the first edition of Michelin Guide Tokyo in 2008.

Prior to L’Osier, Chef Bruno was at The Dining Room at the Ritz Carlton Buckhead in Atlanta, where he gained the Mobile Guide’s five stars and AAA’s five diamonds (only 14 restaurants in North America have this recognition).

He has also been designated a “Chevalier de L’Ordre du mérite Agricole” by the French government.

Hua Hin Today spoke to Chef Bruno in the run up to his guest appearance at Azure.

How long have you been cooking and when did you become a chef?

As soon as I was born I was a chef! I am from a family of pastry chefs, my entire family is in the business and back then it was normal that people would work in the family business. But it was a passion of mine from a very young age to become a chef. I always had a dream to become a chef and I had a dream to have three Michelin stars.

I was born and raised in a family where we ate good food and this meant that I got an amazing education of the palette from when I was a young boy. So I will say I have been a chef my entire life and I will be a chef for the rest of my life. It’s my passion, it’s my life. How would you describe your cuisine and its style?

It’s very French, that’s my education and I have a strong foundation in French cuisine. I first arrived in Asia in 1995 but I also spent five years in America at the Ritz Carlton in Atlanta so everywhere I go I try to pick and taste. It is important for any chef to be curious. My journey has enabled me to add on to my pallet of flavors which helps to make my cooking completely unique.

You won three Michelin stars at the first attempt, not many people do that, what kind of pressure does that put on you as a chef?

First of all it was the dream of my life to take the job at L’osier – to have a restaurant where I could achieve the level I always dreamed of. I knew that Michelin would launch its guide in Tokyo within two or three years so it was a once in a lifetime opportunity for me to try to get three Michelin stars at the first attempt. It was a lot of pressure.

The restaurant is owned by Shiseido and they ensured we had the best of the best of everything, the best food, the best wine, the best decor and lighting. But after we received the three stars there is more pressure because after you reach the top, the only way is to maintain or go down and if you don’t maintain it’s a failure. The restaurant maintained its three stars for four years and to maintain that level of quality is even more pressure than winning the stars initially. What is your process like in developing a menu? Where are you looking for inspiration?

I try not to look for inspiration, for me the process is more instinctive. I will think about recipes once I am at the market looking at the different products. It is very difficult for me to sit down and think about what I will do. I need to be in the motion or in the moment.

I have an ability, like many chefs, that I already know the flavour is in my head before I cook. It is a bit like a musician who already knows the melody and he only writes the notes down on paper after he has the melody in his head. That’s exactly how it is with cooking.

Finally, what do Michelin star chefs eat at home, what do you cook on your days off?

Anything and everything! It can be a simple salad, pasta or dessert, things that we would not normally cook in a restaurant, just done in a good way.

When I cook at home, I just keep it really simple, even if I am cooking for friends. At work I am used to having twenty people clean up behind me but at home it does not work like that!