Did you know that Bang Saphan in Prachuap Khiri Khan is one of the few places where it is still possible to pan for gold?

This weekend saw a rise in foreign tourists to the Bang Saphan area of Prachuap Khiri Khan, according to one senior official.

Mr. Krisada said the tourists seemed to enjoy the gold panning and were excited to take part in something which they had not done before.

He said a particular highlight was one member of the group who managed to find some gold during their first attempt at panning.

The gold is considered to be “a gift given by nature” therefore, anyone who finds gold while panning is allowed to take it home with them regardless of the amount or weight.

There is a culture of panning – the process of digging and sifting for gold – in Bang Saphan, Mr Krisada explained.

But with more publicity, the area could use gold panning activities as a way to attract more tourists.

Bang Saphan, along with Sukhirin in Narathiwat in Thailand’s deep south, are some of the few places in Southeast Asia where it is still possible to pan for gold with relative ease.

Anyone who is interested in panning for gold in Bang Saphan can contact the local tourism centre on 081-3788258. The centre is located 30 metres from the 7-Eleven at Koh Yai Chim.

The centre prepares the tour, guides and equipment for tourists who take part in the gold panning. 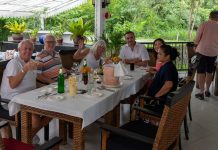 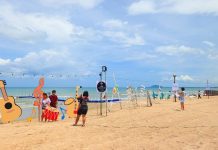