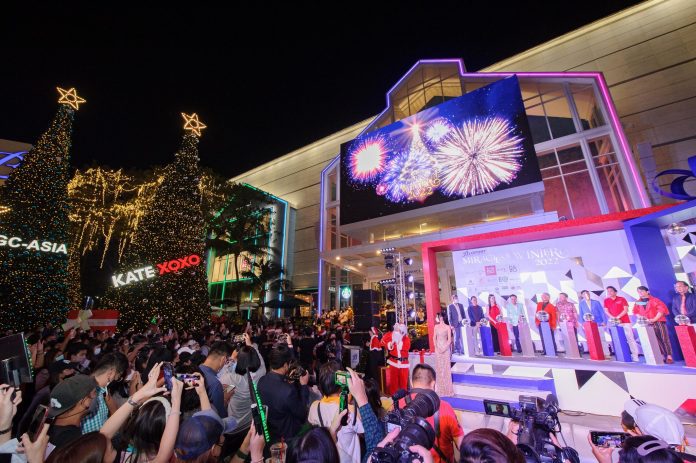 Mr. Suwat Liptapanlop, former Deputy Prime Minister, presided over the opening ceremony of ‘Miracle of Winter 2022’ – a series of festive events which are due to be held at BluPort over the Christmas and New Year period.

The opening ceremony took place at “The Square” at the front of the Bluport Hua Hin Resort Mall Shopping Center, in attendance were Mr. Sathien Charoenruen, Governor of Prachuap Khiri Khan Province, and Mr. Nopporn Wutthikul, Mayor of Hua Hin, as well as a large number of distinguished guests and tourists.

Thai actress and model Davika Hoorne, also known as Mai Davika, officially switched on the lights of the Christmas display at the front of the mall – which is the largest Christmas garden in Hua Hin.

Mr. Suwat said that the event coincides with the re-opening of Hua Hin according to the government’s policy of reopening Thailand and boosting the economy.

The Miracle of Winter 2022 will see a number of events held at BluPort throughout December.

A food festival will take place at the front of the mall, while there are concerts from leading Thai artists such as J-Jetrin (December 24th, 2021) and the Mean Band (December 25th, 2021).

A Countdown Fair, which will include performances from Bee Peerapat and Pae MVL, as well as a variety of other activities will be held on December 31st, 2021.