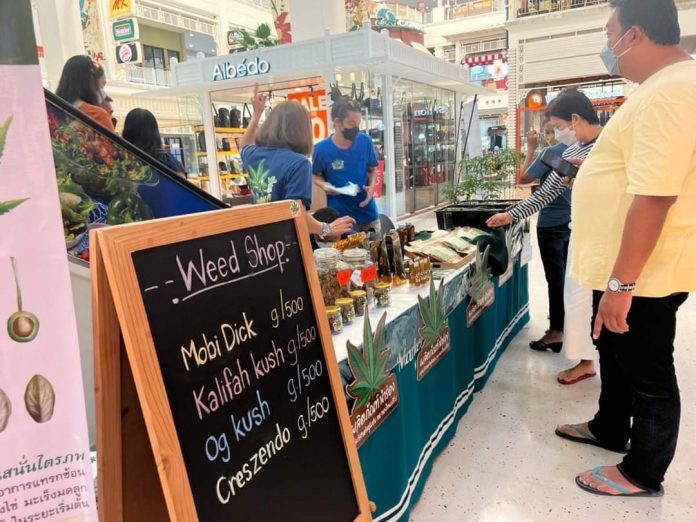 The operators of a pop up store selling cannabis and other cannabis related products have reported brisk business following demand for Thailand’s newly decriminalized herb.

Mr. Thien Seng Methanopakhun, manager of 789 Thongthai Herb, a community enterprise based in Pranburi, which has opened a pop up store in Market Village Hua Hin says their products have proved a hit with customers, especially with foreigners.

Mr. Thien says his store has up to ten different cannabis strains on sale, such as “OG Kush”, “Mobi Dick” and “Crescendo”. The store also sells cannabis honey, balm, brownies, and seeds for customers who wish to grow cannabis themselves.

Customers need to be aged 20 and above and if people want to grow it at home, they should register with the Plook Ganja app, Mr Thien said. Meanwhile, Ms. Saengduean Songrob, vice president of 789 Thongthai Herb, said there will be significant growth in the cannabis industry in Thailand after the country removed marijuana from the Category 5 narcotics list.

Ms. Saengduean said the 789 Thongthai Herb has cultivated 300 cannabis plants but has already ordered more seeds to plant on a 2 rai plot which is expected to yield over 1,000 plants.

Ms. Saengduean said all the seeds are from government approved distributors and urged people to only buy products from approved sellers.

Ms. Saengduen called for regulation of the cannabis industry in Thailand, saying that regulation will help to ensure products of a high quality.

She also said that where possible, government or local agricultural agencies should provide training courses for farmers about the cultivation of cannabis plants as a new economic crop to create knowledge and understanding for those who are thinking about planting.

The general public should also be educated about using marijuana, Ms. Saengduen said.