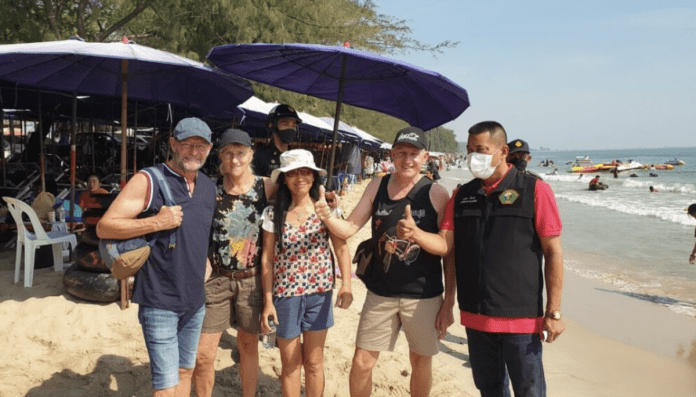 Cha Am beach was teeming with visitors on Sunday as thousands of tourists opted to relax by the sea during the Chinese New Year celebrations.

Vendors at the beach reported brisk business among visitors, saying that many families had come to the beach and that there were lots of children playing in the sea.

A heavy build up of traffic was seen heading towards the beach on both Saturday and Sunday.

According to Mr. Sunthorn Jiamdee, from Cha Am Municipality, this year’s Chinese New Year holiday in the resort was very busy. Mr Sunthorn said that municipal staff had visited the area to publicize and inspect canvas bed operators to warn them against exploiting or over charging tourists for sunbed rental, food and drinks.

They were also out to warn tourists about the potential dangers of swimming in the sea during strong waves.
If tourists are taken advantage of by operators, they can file a complaint at the tourist service point, which is located at the beach viewpoint, Mr Sunthorn said.

He explained that a ‘three strikes and you’re out’ policy is in place for sunbed operators.

If a complaint is made against a beach vendor, staff at the tourist service point will take a record of the complaint.

If a second complaint is then made, the beach vendor faces being suspended from work. But if a third complaint is made, they will have their sunbeds seized and will be unable to work.