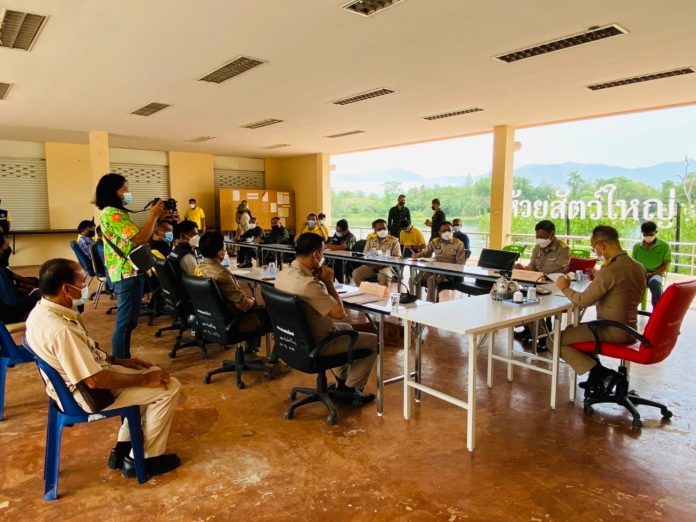 Officials have met with locals to discuss measures aimed at reducing the number of human-elephant conflicts in a sub district of Hua Hin.

The issue of elephants encroaching into farmland, damaging crops and property and attacking villagers in Huai Sat Yai has intensified in recent months.

The meeting, which took place on Monday (April 18), was attended by Mr. Komkrit Charoenpattanasombat, deputy governor of Prachuap Khiri Khan Province along with the heads of government agencies and relevant department officials, local village headman and residents of Huai Sat Yai.

It was decided that a short term measure will see relevant agencies jointly establish patrols to watch out for wild elephants in the area. Changes will also be made to which are prone to elephant invasion to make it easier for local people to see the wild elephants in order for them to avoid potential conflicts.

A new notification centre will be established between Huai Sat Yai Subdistrict Administrative Organization and the village headman of Huai Sat Yai, while a monthly conference will be held to discuss strategies to tackle the problem, which will then be reported to the provincial governor.

Over the long term, Hua Hin district will set up a relief fund for people who are injured or have property or crops damaged or destroyed by the elephants.

New lighting will be installed, new fences constructed and damaged fences will be repaired around the areas where elephants are known to come out of the forest.

The news comes following a number of confrontations between elephants and locals in Huai Sat Yai throughout the past year.

Most recently, local farmer Mr. Chuchai Lueangphadung, 57, suffered three broken ribs, broken teeth, a swollen face, chest pain, and numbness in his right leg due to a herniated disc after being trampled by elephants at his farm.

In early April, a 17 year old boy was killed, believed to have been trampled to death after confronting elephants who had been eating crops from another farm in the area.