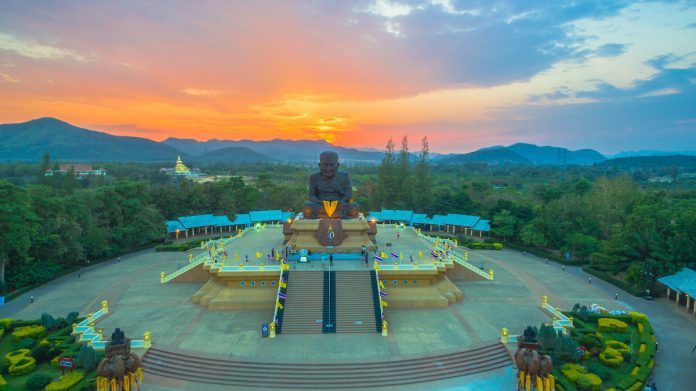 The “365 Days of Miracle Prachuap Khiri Khan – can travel every day” campaign highlights eight religious or sacred sites throughout the province.

The statue of Luang Pu Thuat at Huay Mongkol is the largest statue of its kind in the world.

Buddhists believe Luang Pu Thuat to be revered and is said to have performed miracles.

His movements throughout the southern Thai peninsula, particularly in Thailand, Malaysia and Singapore, represent a path of pilgrimage for many buddhists from the region.

The site also features a three-headed Erawan elephant sculpture where people come to worship and pray and throw coins into the elephant’s mouth.

People typically visit Huay Mongkol Temple to pay respects for prosperity, boost prestige, and ask for blessings for safe travel, free from danger. Merit makers also visit to ask for luck and money. If their desire is granted, they will bring boiled eggs to present to Luang Pu Thuat.

Phra Phrom Shrine is regarded by many as one of the most sacred places in Prachuap Khiri Khan, especially respected by villagers living in Khao Takiab.

Inside enshrines the statue of 4-faced Phra Phrom turning to 4 different directions. The style of the shrine resembles a garden and is easily accessible, which allows for a pleasant atmosphere, and a cool breeze to flow through the area.

Its structure also symbolizes the didactic concept; 4 pools on 4 sides of the shrine signifies 4 typical elements: earth, water, air, and fire. Believers who visit the shrine do so to ask for wealth and job security.

This island located near Sam Roi Yot beach is part of a legend that is told throughout the province. Legend relates to a young woman named Yom Doy, the daughter of “Nang Rumphueng”, “Ta Mong Lai,” the son of a Chinese emperor and Chao Lai, the son of Petchaburi governor.

The story essentially relates to a love triangle and the death of Yom Doy who is said to be buried on the island.

People flock to this location to ask for love and fortune, and when their wishes are granted, they usually bring women’s underwear or Thai dresses as an offering to say thank you.

Wat Kuiburi is the oldest buddhist temple in Kiburi, very much revered by Thais from near and far. The temple grounds comprise the famous temple with a statue of a special monk who often fasted days at a time.

The former abbot of Wat Kui Buri (Luang Phor Mak or Bun Mak) is highly respected by the people of Kui Buri. In the past, he was known for his strictness in monastic discipline and kindness towards the villagers.

When he was alive and free of the temple’s numerous duties, he would sit and meditate on a regular basis, never leaving his cubicle. For this reason, he is often referred to as “Luang Phor Nai Kuti” (Monk in cubicle).

People normally visit Kuiburi temple to come to pray for blessings for wealth and commerce, and when they are successful, they often bring the Thai flower garland to present to Luang Phor. Prachuap Khiri Khan City Pillar Shrine is located on Sala Chip Road, opposite the city hall. It was constructed in the Lopburi style of art during the period when Pol. Sub-Lt. Amnuai Thaiyanon was governor of the province.

His Majesty the King had HRH Crown Prince Maha Vajiralongkorn attend the opening ceremony of this shrine on 20 August, 1994. The shrine is the symbol of auspices and prosperity of the city.

People visit to seek blessings for prosperity and ask for fortune, work, and stability, and when the request is granted, people return with offerings of firecrackers. The “Giant Golden Swan” located on the Bangkok bound side of Petchkasem Road in Thap Sakae is thought to be a gathering spot for angels.

The former abbot of Huay Luek Temple, ‘Phra Kru Paisarn,’ built a gigantic golden swan in 1971. The objective is to provide a place of support for the deities, and it was completed in 1975.

People who make merit at the temple do so to ask for fortune or money, and when the request is granted, frequently bring bracelets or sculptures of swans to say thank you.

Admire the splendor of the world’s only sugar palm wood church.

This chapel was built from 70-100-year-old palm wood and more than 10,000 sugar palm trees over a 7-year period. Inside the ordination halls is the enshrined of “Luang Pu Sai,” a revered monk who is almost 200 years old and carved from banyan wood.

Villagers believe that whenever someone becomes ill or suffers from any ailment, they should pay their respects to him and pray for blessings by bringing a flower garland to present. Wat Tang Sai is a magnificent temple which was built in 1996 to mark King Bhumibol Adulyadej’s 50th year of reign. It has 9 pagodas to represent His Majesty The King Rama IX and it can be seen sitting on top of Thong Chai Mountain just up from the Big Golden Buddha overlooking Baan Grood Beach.

The temple complex has the Thai name, Phra Mahathat Chedi Phakdee Prakat and has some beautiful gardens, a large Golden Buddha and some demon statues. These demons are not representing evil as they would in the western world but good powers acting as Guardians.

Built in 1996 to commemorate the 50th year anniversary of the accession to the throne of the late HM King Bhumibol Adulyadej, this is a group of beautiful Rattanakosin-style pagodas with elegant and royal details in all its five-storey complex.