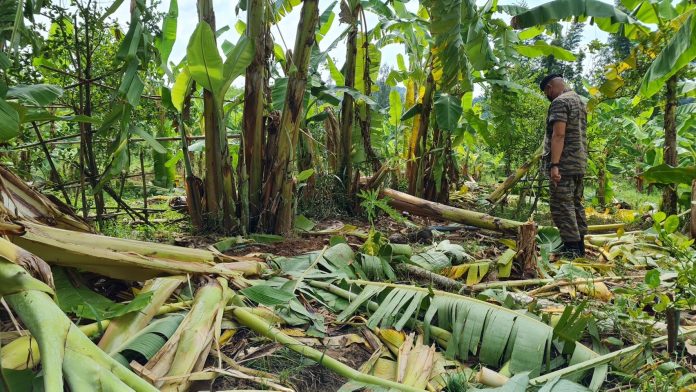 Up to 300 banana plants were damaged as wild elephants foraged for food in a banana plantation in Pala-U.

It is understood that up to four elephants destroyed around 300 plants over an area of approximately 16 rai.

One farmer spoke of the impact the damage to the crop will have on his income, saying the destruction of the crops mean would take at least two months to recover.

The farmer said that normally him and his staff can hear the elephants if they visit the plantation at night.

However, due to recent heavy rains non of the locals heard the elephants enter the plantation and were only aware of the damage to the crops the following morning. In addition, the sound of the heavy rain also drowned out the sound of an alarm from a low vault fence which normally helps to keep the elephants away from the crops.

The Naresuan Camp Border Patrol Police have warned farmers in Huai Sat Yai Subdistrict to keep a close eye on their agricultural crops.

Especially during this period, wild elephants tend to come out to eat and destroy farmers’ horticulture on rainy nights. Farmers must be especially careful, even if the siren fence has been installed.

Wild elephants are intelligent and learn human behavior and often come out to feed during the middle of the night or early in the morning.

The Huai Sat Yai Subdistrict Administrative Organization will collect the damage and bring it to the committee, which will expedite action to help the farmers damage