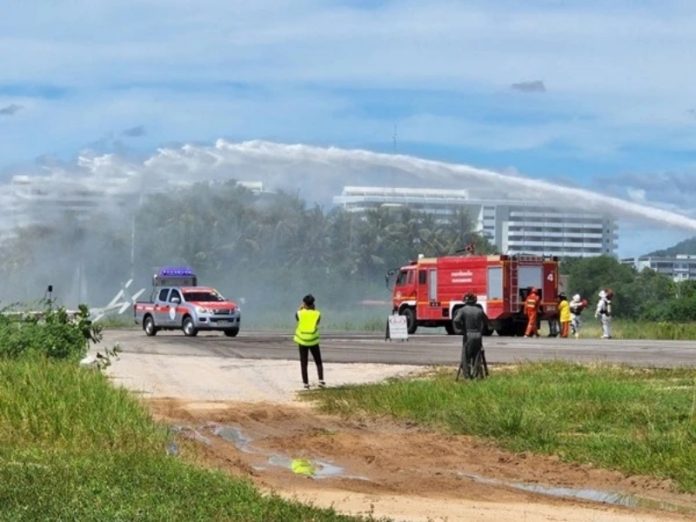 Military personnel and other first responders have been taking part in a four day emergency response drill at Hua Hin Airport.

The training, which took place from 27 July to 1 July, was organized by the Royal Thai Armed Forces Headquarters, in collaboration with Hua Hin Airport.

More than 50 soldiers participated in the exercise which simulated the rescue of people who had been injured after a plane crashed into the sea. The drill began with the control tower at Hua Hin Airport receiving an emergency notification that a King Air 350i plane with pilots, mechanics and 6 passengers on board had crashed into sea in front of the airport.

The training drill then simulated what would be a full scale emergency response, which started with Mr. Narong Arunphakmongkol, Acting Director of Hua Hin Airport notifying all relevant agencies.

Units from the local fire brigade, doctors and nurses, paratroopers from the Naresuan Camp in Cha Am and Hua Hin Airport Rescue Service would be called upon to attend should such an emergency occur. The Royal Thai Armed Forces Headquarters would also deploy two helicopters, signal relay cars and soldiers, while a central command room would be set to organise the emergency response.

General Nantawat Tasngam, chairman of the Thai Air Force Headquarters-level audit and standardization committee, said two Bell412 EP helicopters and an EC 155 B1 helicopter took part in the training and simulated the rescue of victims from the sea before they would be transferred to nearby hospital.

General Nantawat Tasngam stated that the purpose of the training was so that all agencies and units could respond effectively and efficiently should a major incident occur at the airport.