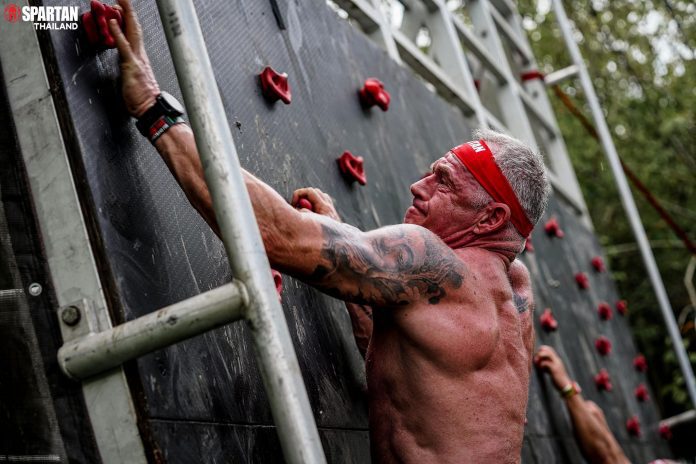 Two fitness enthusiasts in Hua Hin who became friends over their passion for Spartan obstacle course racing are hoping to encourage others to reap the benefits of taking part in the grueling but increasingly popular sport.

Derek Russell and Paul Van Slyke first competed in a Spartan race in Pattaya in 2017 and have gone on to form a friendship over their shared love of fitness.

For the uninitiated, Spartan is a series of obstacle races of varying distance and difficulty ranging from 5 kilometers to marathon distances.

Elite is for the most serious and competitive racers, while Age Group sees racers compete against those in the same age bracket. Open is for all athletes aged 14+ of all skill and fitness levels.

The first Spartan was held in the United States in 2010 but the race is now popular around the world, where more than 250 events take place in more than 40 countries and across six continents.

Regarded as the world’s largest obstacle course race, Spartan attracts more than one million annual participants across all fitness levels, from beginners to elite.

“We first competed in Spartan as part of a team with eight other people, but we didn’t quite know what we were getting into or what to expect,” Derek, 58, told Hua Hin Today.

“We were even part of a group of people in Hua Hin who set up a training area just off the Pala-U road, which included rocks, ropes, spears and sand bags,” Derek added.

Since taking part in that first race back in 2017, Derek says he must have competed in close to sixty Spartan races throughout Southeast Asia.

“I have mainly competed in the Asian Series and have taken part in races in Malaysia, Hong Kong, Singapore and the Philippines. The good thing about Spartan is that it has meant I have visited places that I would probably never have gone to otherwise. I even went to Borneo for one race,” Derek said.

In 2018, Derek finished 3rd in Asia in his age group and along with Paul qualified for the World Championships.

In 2019, Derek and Paul competed in the Spartan event which was held in Hua Hin and most recently took part in a race held in Phuket, where they finished in 2nd and 1st place, respectively, for their age groups.

Derek says himself and Paul now hope to create a team made up of people living in Hua Hin to compete in future events in Thailand and maybe even across Southeast Asia.

“I really want people to experience what we have through competing in Spartan,” Derek said.

“The whole experience has been so much fun and I believe that other people could really benefit from that experience too,” he added.

The pair hope to organise the first training sessions in February with the aim of taking part in the Spartan event which is due to be held in Phuket in November 2023.

According to its website “Spartan obstacles are designed to test every facet of your mental and physical strength.”

Some of the obstacles include carrying an atlas stone, crawling under barbed wire, a rope climb, swinging on along monkey bars, traversing a ‘Z’ wall and leaping over fire. Anyone who is unable to complete one of the obstacles is required to perform thirty burpees as a forfeit before they can move on to the next obstacle.

Derek and Paul, who are also the founders of the popular local running group Hua Hin Trail Runners, will be able to show those interested the techniques needed in order to tackle each obstacle along the race.

While Derek says that anyone who wants to take part should have a reasonable base level of fitness, he says the Spartan training and racing is essentially open to anyone – both men and women, young and old.

“This is more about building friendships and a community with like minded people coming together to exercise and have fun,” Derek said.