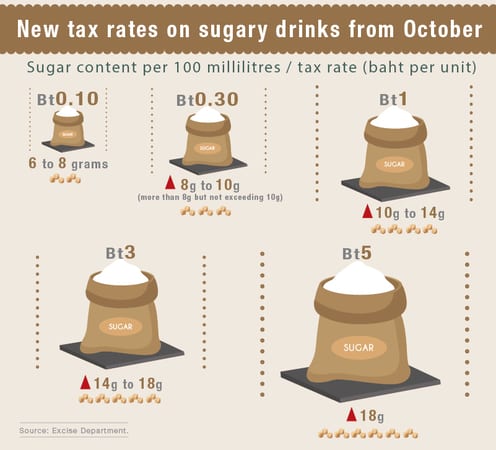 The Excise Department has announced that taxes on sugary drinks will double from October 1, with beverages containing 10 to 14 grams of sugar being taxed at 1 Baht per 100 millilitres instead of 0.5 Baht per 100ml, adding that this tax will not be passed on to consumers despite the higher cost of production.

Nattakorn Utensut, the department’s deputy spokesman, said most producers of sweet beverages had not reduced the sugar content out of fear of losing customers; instead many have just launched new, less-sweet versions of their drinks.
The new tax will boost the overall tax revenue to 3.5 billion Baht to 4.5 billion Baht from the current collection of 2 billion to 3 billion Baht annually.

Taxes on sugary drinks will also be doubled every two years. For instance, from October 1, 2021, beverages containing 10g to 14g of sugar will be taxed 3 Baht per 100ml before rising to 5 Baht in 2023. This progressive increase in tax rate is expected to force manufacturers to cut down on the amount of sugar in their beverages. Though the tax was first imposed in October 2017, only one manufacturer reduced the sugar content in its products, while others only responded by launching new, less-sweet products.
Nattakorn said most people are still not aware of the health risks associated with sugar, adding that only two groups of people – those below 30 in age and those over 60 are cautious about consuming beverages with high sugar content. People of working age still prefer sugary drinks, he said.

He added that now more producers have started specifying the sugar content and other ingredients in the labels on their products, adding that these specifications are now provided in as many as 200 to 300 items, up from just 60 to 70 items before.