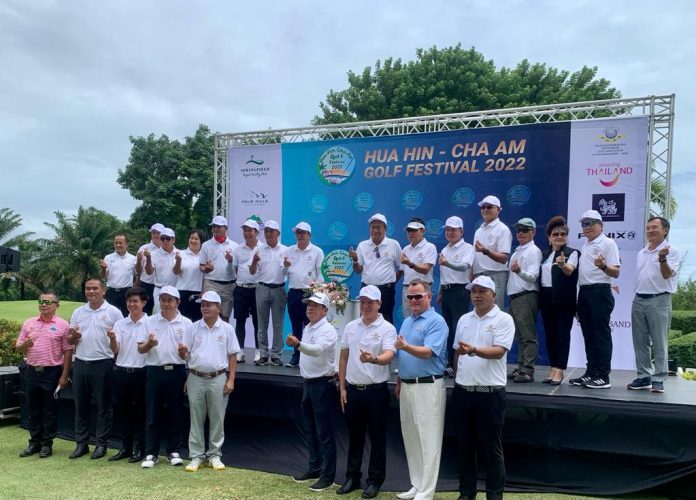 The official opening of the Hua Hin – Cha Am Golf Festival 2022 was held on Sunday (Aug 7) at Seapine Golf Course. The Hua Hin – Cha Am Golf Festival is now in its 21st year and is held in order to encourage Thai and foreign golfers to play golf during what would typically be the low season.

The festival also helps to promote golf tourism in both Hua Hin and Cha Am, further establishing the region as one of Thailand’s best golf destinations.

Tournaments will also be held over 4 weekends in August and September, including on August 21st, August 27th, September 4th and September 11th. “Congratulations to our Chairman Khun Suwit and the Executive Committee of the PPGA for organizing the official opening of the Hua Hin Cha Am Golf Festival 2022 at Seapine Golf Course, Stacey Walton, President of SKÅL International Hua Hin & Cha Am told Hua Hin Today.

“I was delighted to meet with Khun Tanes, Deputy Governor of the TAT to hear his views on target groups and from which countries.

“Khun Tanes explained how the West is being challenged by the economy and rising fuel and food costs so we need to focus on India as the main influx of tourism since the pandemic.

“Golf in India is a growing sport. Golf is especially popular among the wealthier classes, in which there are just under 200 courses in the country with a long history going back as far as 1829 when the Calcutta Golf Club was first established. India has a number of world class courses and am sure Thailand is an attractive golf destination for this target group”.

Meanwhile, Skal International will be supporting the Golf Festival amongst its network in Thailand and overseas and encourages club members to join the 2-day Expat Golf Challenge on 23rd & 24th September 2022 as this will be a great opportunity for social networking as well as a fun golf competition.