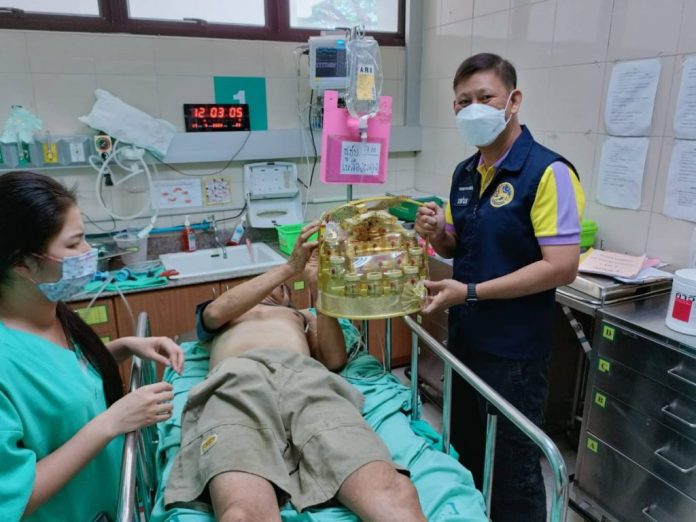 A man was seriously injured after being attacked by elephants in the Hua Sat Yai sub district of Hua Hin on Sunday morning (April 17).

Local farmer Mr. Chuchai Lueangphadung, 57, was found by his wife Pranee lying on the ground at their farm in Ban Fa Prathan Village just after 6am.

Mrs. Pranee explained how her husband slept in a separate property on the farm in order to help guard their crops from elephants.

She said the alarm was raised by her sister-in-law who said she had heard Mr. Chuchai shouting.

When Mr. Chuchai did not answer his phone, Mrs. Pranee went to investigate and found her husband seriously injured on the floor.

The Huai Suat Subdistrict Administrative Organization’s rescue team was then notified and Mr. Chuchai was transported to Hua Hin Hospital for treatment. Mr. Chuchai had suffered three broken ribs, broken teeth, a swollen face, chest pain, and numbness in his right leg due to a herniated disc.

Mr Chuchai, who was later visited in hospital by Polkit Phuangwalaisin, Hua Hin district chief, said that the incident had happened so quickly.

He said he had woken early in the morning to go to the bathroom and was shocked to see the elephants on his property.

He said he thinks the elephants then charged into him as they fled.

The incident is the latest in a number of confrontations between elephants and locals in Huai Sat Yai.

Earlier this month, a 17 year old boy was killed believed to have been trampled to death after confronting elephants who had been eating crops from another farm in the area.