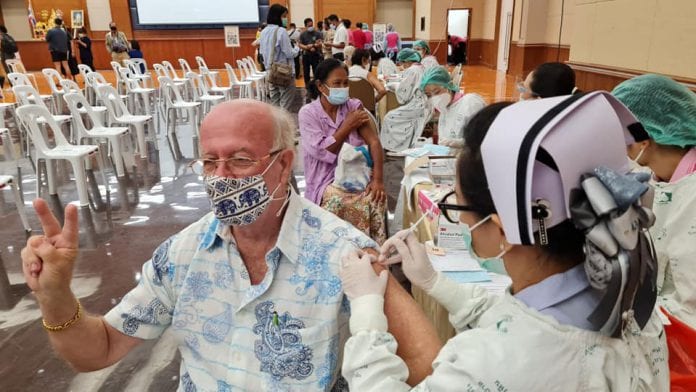 Prachuap Province Public Health on Tuesday (June 8) released data on the number of vaccine doses administered to people in the province.

On Monday, (June 7) the province began its mass vaccination program, with just over 12,000 doses of the AstraZeneca vaccine given to people aged over 60 or with underlying health conditions.

Provincial health chief Dr. Suriya Kuharat revealed that a total of 12,082 doses of the vaccine were administered across the 8 districts in the province, including in Hua Hin.

Dr. Suriya said that the province had targeted administering 13,866 doses on Monday. However, some vaccines were not administered due to people not passing screening or not attending appointments.

Dr. Suriya said that 115 people, or 0.9% showed symptoms after vaccination, the most common symptom of which was high blood pressure (87 persons), while 17 persons complained of dizziness, the remainder were with mild symptoms such as nausea, palpitations, and a rash, but all recovered quickly.

The next day for mass vaccinations throughout Prachuap Khiri Khan will take place on June 14.