60 year old Mrs Jaree Chinphong, a pork butcher at Hua Hin fresh market, is complaining that her son still hasn’t received justice more than 7 years after he was seriously injured after being arrested by Hua Hin police for drug trafficking in January 2015. She has filed a complaint with ‘Mr Decha’, who is a famed lawyer.

Mr Danthai Chinphong, or Joe, is now 41 years old, he was arrested by a police task force and placed into a car for more extensive searches to be carried out while further searches for evidence took place at his house in Hua Hin.

Two hours later Joe’s mother was notified by police that her son had jumped out of the car but that the police were able to recapture him, but her son had been injured and had to be taken to Hua Hin Hospital and urgently needed surgery due to brain swelling. Mrs Jaree Chinphong is not convinced by the police account because when her son was brought to the house he was handcuffed in the car with police sitting on both sides of him.

Over the past 7 years, the mother has been to complain to many agencies including the Royal Thai Army 15th at Damrongtham Centre, the office of Public Sector Anti-Corruption, and the Royal Thai Police, asking for help to inspect the police operation on that day, but so far nothing has progressed.

The mother herself has had to bear the expense of THB 50,000-70,000 for the care of her son who will be disabled for the rest of his life. She admits to her sons involvement in the drug trade and accepts his arrest for such illegal activity but surely such an outcome is an excessive response and result for his crime.

Since that terrible day more than 7 years ago, 2 police officers from the arrest team have been to visit and talk to her in an attempt to clear the problem. She is requesting financial compensation to assist her with the care of her 3 grandchildren, Joe’s kids, but no such recompense has yet been forthcoming.

There is also the financial burden of her sons care, medicine, carers and equipment is vital for his wellbeing. She is again hoping that the Royal Thai Police will take a fair look at the events of that day, and recognize that the actions of their officers were not commensurate with the crime that had occurred. She is getting older each day and is becoming more afraid of what will become of her son and grandchildren in the future.

Pol Col Paitoon Promkeian, the Superintendent of Hua Hin Police Station, said that the incident happened before he was appointed in 2019, so he doesn’t know the truth about it. But he has asked the arrest team at Hua Hin Police Station to report to him the facts of what occurred that night and he will investigate how Joe’s injuries had come to be inflicted. He will check their accounts with the documents preserved in police records and consider whether any further action is required.

Pol Col Paitoon has reported to Major General Wanchai Thanatham, Commander of the Provincial Police in Prachuap Khiri of his planned action. 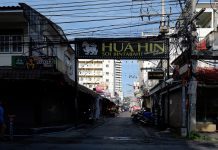