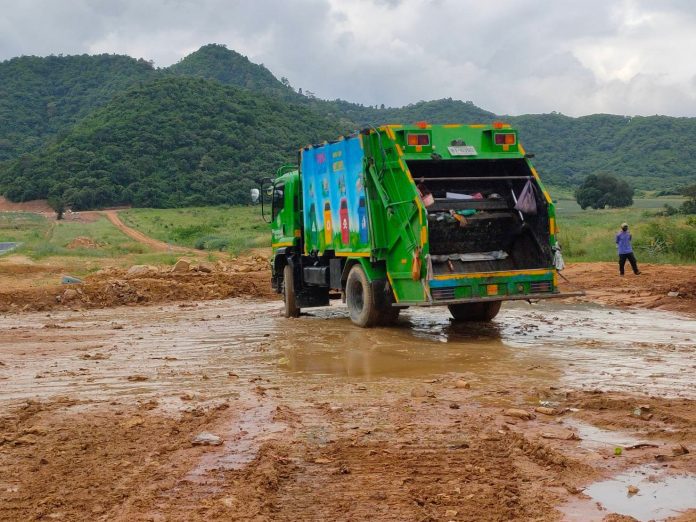 A new privately owned landfill site has opened in the Tubtai sub district of Hua Hin. On Thursday Nov 18th the Deputy Mayor of Hua Hin, Ms. Pailin Kongphan, led municipal officials around the new site which is located at 332 Village No. 7, Tubtai subdistrict, approximately 2.5 km. away from Pranburi Dam. The 32 rai site is operated by Six Tiger Co., Ltd. after the company were formally approved to create a legal landfill in Prachuap Khiri Khan province.

The visiting party were shown the site’s facilities and layout by manager Mr. Nirut Jaikla. Mr. Nirut said that the company had requested permission from the Administrative Organisation to build a ‘garbage pit’ in early 2021, the application passed all the necessary regulatory steps including having been approved at a public hearing with local residents.

Mr. Nirut explained some of the process of creating the landfill site which included digging large pits for daily waste, with each pond filled with a HDPE plastic fabric which is 1.5mm thick and is placed at the bottom of each pit to prevent wastewater from garbage flowing into the ground. Special wells have been created to hold water in order to check for heavy metal contaminants at the site, trees have also been planted around the area to help reduce any odours coming from the site.

All measures being followed at the site are in accordance with the requirements of the Public Health Environment Council. Mr. Nirut said the project has cost a total of THB 30 million and will have 11 officers stationed there, the company aims to reach agreements with the local governments of Hua Hin and Pranburi districts to bring waste from each area for disposal at the site.

The site can process up 200 tons of waste per day, charging THB 600, 700, or 900 per ton, depending on the type of waste. The company will also set up an environmental fund to give to Ban Wang Koi, Village No. 4, Thap Tai subdistrict Administrative Organization, to help support and promote the environmental management of the local area.

The opening of the new private landfill site comes after long-running problems with garbage collection and waste management in Hua Hin. Back in July, Hua Hin municipality opened a controversial temporary landfill site on Soi 102 after a contract to send waste to a site in Pranburi ended.

However, the site was located close to a number of residential areas, with locals complaining about the environmental impact of living so close to such a site. Hua Hin’s Mayor later announced the site would close after a deal was struck to send Hua Hin’s trash to Nakhon Pathom for processing.