From today, an amendment to the Land Transport Act means traffic police can no longer confiscate driving licenses.

Police can still record the details of a driver’s license but must then return it. The new system will also remove the risk of licenses being lost while in the care of the police, as has happened in the past. Tickets for those who break traffic laws will be issued through the post.

Speaking to Thai news website TNA, a member of the traffic police says the new law will “lessen conflict between the police and the public”, adding that there had been “misunderstandings” in the past over interpretation of traffic laws, not helped by social media users suggesting ways of getting around the law.

TNA reports that the number of outstanding fines for traffic offences is an issue that needs to be addressed, with only 20% of 13 million fines issued having been paid.

A system connecting the police to the Department of Land Transport (DLT) is expected to be up and running by October, meaning drivers who don’t pay their fines won’t be able to renew their road tax, thereby making it illegal for their vehicles to be on the road. 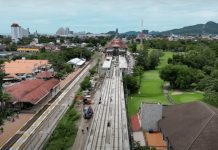