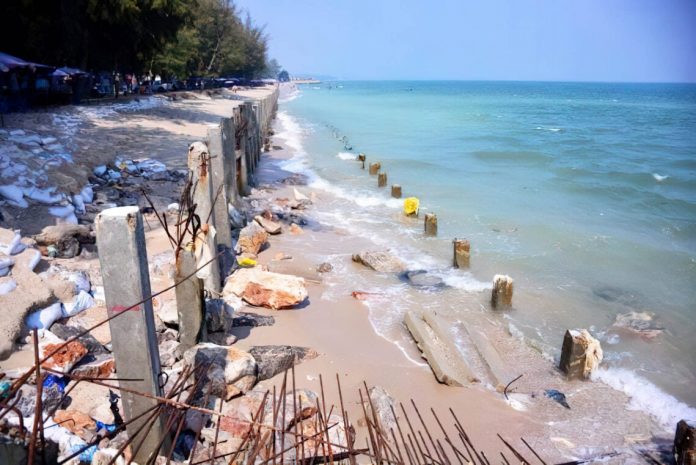 Shifting sand is causing more problems for tourists, locals and entrepreneurs in Cha Am.

On Tuesday, officials inspected an erosion hotspot on Cha Am beach to see if anything can be done.

Erosion is an ongoing problem on Cha Am beach.

The local authorities and other relevant agencies are currently carrying out a major project to install wave walls and steps along various stretches of the beach to stop it from eroding further.

Mr. Yuthaphon Angkinan, Advisor to the Minister of Natural Resources and Environment (TAT), together with Mr. Apichai Ekwanakul, Deputy Director-General of the Department of Marine and Coastal Resources were part of the group who inspected the beach following feedback that the issue is affecting entrepreneurs, tourists, and local residents. The group said they will liaise with the relevant agencies to see what more can be done to stop the erosion.

Measures have been taken to the remedy the erosion along 45.40 kilometres of the coastline. However, there is still approximately 5 kilometres of coastline where erosion is continues to be a problem.

The news comes after netizens and national media recently criticised some of the measures implemented to stop the erosion.

The bulk of the criticism centred around the steps that have been constructed along the beach to stop it disappearing into the sea.

Netizens said the steps were unsightly and left Cha Am beach unrecognisable.