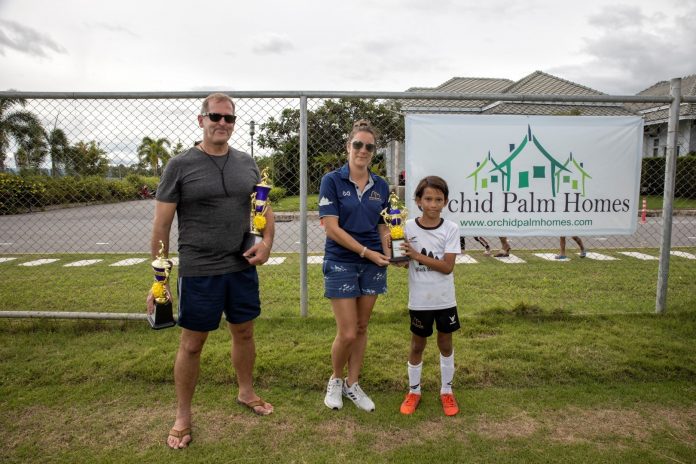 Having been postponed multiple times due to Covid-19 the Orchid Palm Homes Cup III will finally take place on November 28th at True Arena Hua Hin Sports Club. The 6 a side tournament will feature four Under 12 teams.

Black Mountain, Vanon Kanong and PSG will be representing Hua Hin while Shark Boy are travelling from Pak Nam Pran.

With eight teams having signed up to the original tournament this competition will be slightly scaled down but Orchid Palm Homes owner Stephen Ayling is just happy to see the event finally going ahead, “Schools have been closed and opportunities for children to get outside and exercise have been really limited this year. We are proud to support this tournament and are glad that the players will be able to get outside, get running about and have fun playing football again.” Paul King, the manager at True Arena, is also pleased to see children’s sport back on the calendar, “It has been a quiet year for obvious reasons but things seem to be getting back to normal and nothing makes me happier than to see young children getting to enjoy the five star facilities here at True Arena.”

Among the coaches in attendance will be former England international Gary Stevens. The UEFA Cup winner will be coaching the Black Mountain Under 12s and is looking forwards to being back on the touchline again after a long break,

“This will be the first time I have coached a team in a tournament this year, it has been a long break. We are really grateful to Orchid Palm Homes for their generosity in sponsoring this event and the children are all excited to be playing at True Arena again.”

The Orchid Palm Homes Cup II took place at the Hua Hin International School last September. KKS Academy from Prajuap Kiri Kan were the winners, beating SS Academy in the final after a penalty shoot out.