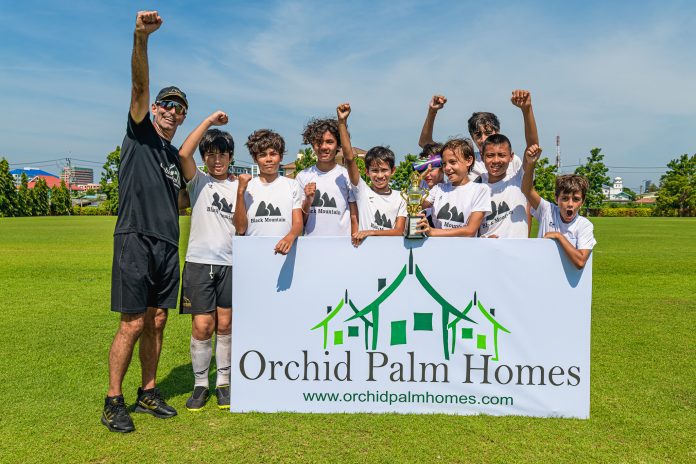 The Orchid Palm Homes Cup VII is set for the Hua Hin International School in Black Mountain on February 5th. The 6 a side tournament will feature eight Under 10 teams.

This biannual tournament is in its fourth year and has become an eagerly anticipated event on the local football calendar in Hua Hin. The Orchid Palm Homes Cup VI last year featured Under 13 teams and this time it will be an opportunity for the Under 10s.

In total eight teams have signed up with Black Mountain and HHFA both sending two teams. Hua Hin City, Taptai, PP United and Nong Hoi will also be in action at the first Orchid Palm Homes Cup of 2023.

This will be the first time that the tournament has featured the group of players born in 2013 and after and Orchid Palm Homes owner Stephen Ayling is excited to see a new generation of local players in action,

“Some of these children would only have been six years old when the inaugural Orchid Palm Homes Cup took place three years ago. It is great to see that the competition has stood the test of time and with eight teams signed up local football really is going from strength to strength and we are proud to be supporting it.” During his playing career Black Mountain head coach Gary Stevens played for Brighton, Tottenham and England. He won the European Championships with his country at Under 21 level and won the UEFA Cup with Tottenham but says he might never had become a professional player if he hadn’t had the opportunity to play competitively as a youngster,

“I can still remember being 10 years old and spending the whole week at school thinking about my match at the weekend. Children love playing competitive football and it is also a really important part of their development so it fantastic that Orchid Palm Homes has made such a long term commitment to the local football scene in Hua Hin.”