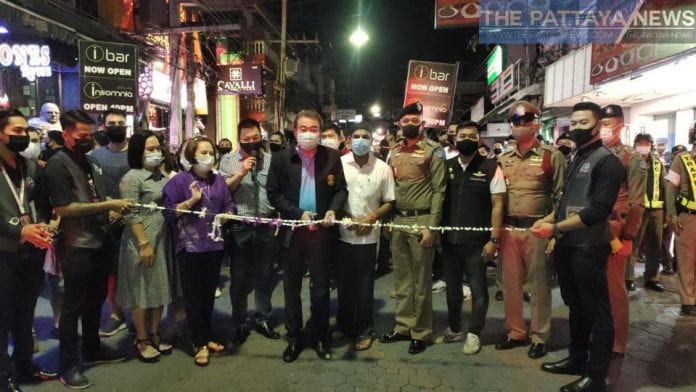 The famous Pattaya Walking Street is now open for traffic 24 hours a day, 7 days a week… but not everyone is happy with the decision.
Business operators along the Walking Street area have pleaded the Pattaya local government to extend a current trial allowing vehicles to pass through the street at all hours of the day.
The trial was proposed due to the lockdown of international borders as the street has been much quieter due to lack of foreign tourists.
Although most of the businesses remains closed, some of the night spots are still packed with local weekenders even with reduced traffic. Deputy Mayor Ronnakit said “this opening event is to invite both Thai and foreign tourists to visit the walking street.”
“Now, vehicles are being allowed to enter walking street as a long-term trial.” Ronnakit added.
However, there were mostly negative comments on the social media about the issue. The traffic combined with pedestrians passing through appeared to be somewhat disordered on the first night.
Ronnakit said that the opening to traffic at all hours is only temporary until borders are allowed to reopen and foreign tourists can return. Unfortunately, it may take a few more months.
Source: The Pattaya News
Photos: The Pattaya News