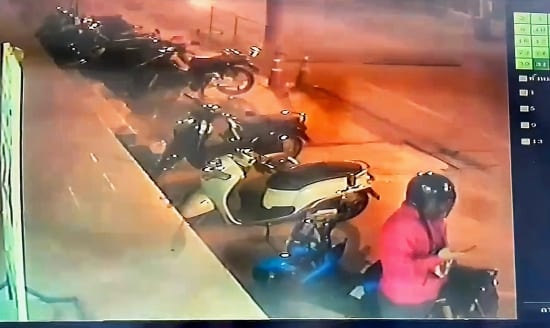 Police say they are searching for a man who allegedly stole more than 8,000 baht from a laundromat in Hua Hin.

At approximately 8.30am on Monday (May 31) police responded a report that the 24 hour laundromat located next to the Baan Khun Por night market on Soi 88 had been burglarised.

According to police, the man entered the laundromat, and used pliers to cut the coin boxes from 12 washing machines, before casually fleeing on his motorcycle with more than 8,000 baht in cash.

Police say they have CCTV footage of the suspect and fingerprints from the scene.

In the footage the man can be seen wearing a distinctive fuchsia pink coloured jacket, however his face is covered by a motorcycle helmet.

Police say they are studying CCTV of the area and expect to apprehend the suspect soon.