A number of police forces responded to a rally in the central capital by pro-democracy activists who were campaigning to abolish the royal defamation law.

Several protesters were arrested during a brawl near the capital’s Victory Monument. It was the latest crackdown on dissent by the police acting aggressively against activists calling for the reform of the monarchy.

Protesters began assembling near the monument before noon as they unfold banners with messages criticising the government and the ‘Lese Majeste’ law.

About half an hour later, police forces arrived at the scene and warned the demonstrators to leave the area, citing the Emergency Decree’s ban on gatherings amid the Covid pandemic. When the crowd refused, police charged at the activists and forcibly took away several people and confiscated the insulting banners.

Another officer was also announcing through a loudspeaker advising the media to leave the area, and critcising the protesters for “not considering what’s best for the nation.”

Meanwhile, the latest activist to have been charged with Lese Majeste was a 21-year-old student from Thammasat University Sirichai Nathuang (nickname ‘New’), who was arrested on Wednesday night at his apartment and was denied a lawyer for several hours.

The student was allegedly accused of spraying painted messages critical of Lese Majeste law on a billboard of Royal Family members near his home last Sunday. 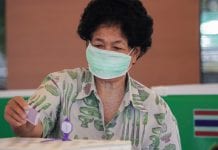